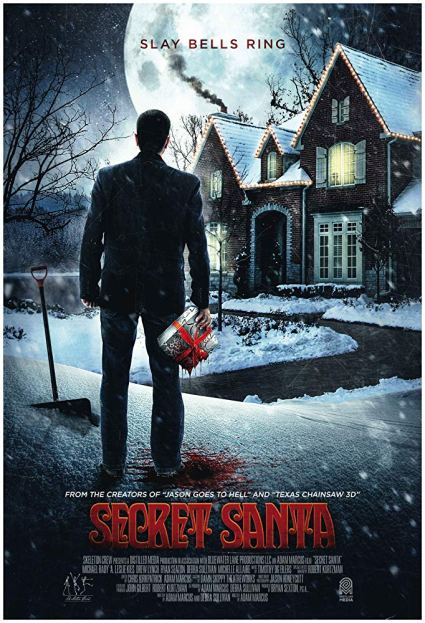 A large family comes together for Christmas. Like many other families, this one is broken and estranged and dysfunctional. As they all come together around the table for Christmas dinner the fighting begins. But these aren’t your ordinary family arguments. The fights turn violent and this average holiday get-together becomes a bloody, chaotic massacre.

Everyone believes they have a weird family. Some family members you love and others you can’t stand. Writer/director Adam Marcus (Jason Goes to Hell: The Final Friday, Texas Chainsaw 3D) and co-writer Debra Sullivan (Conspiracy, Texas Chainsaw 3D) take something we are all familiar with and amplify it. This family has deep seeded issues due to divorce, remarriage, success, failure, and of course a large dose of sibling rivalry. When something happens that turns the family members into crazed, bloodthirsty killers the excitement really kicks in. The dynamics between various family members are some of the highlights of the film because many audience members will see themselves and their families in the film. The hilarious dialogue helps to highlight those strained relationships and it even carries into some of the kill scenes. As truths are revealed and the non-crazy family members try to fight for their lives, things get very thrilling and hilarious.

There are a few breakout performances in this film that will stick with you long after the credits roll. A early standout is Nathan Hedrick (Art of War, Seven Deadly Sins) as Jackson, the outspoken horndog half brother. Hedrick’s performance is totally over the top, but it works for his character. He’s loud, he’s crazy, and when he becomes violent he has some hilarious scenes. A Leslie Kies (The Newsroom, Jane the Virgin) shines as April. April is the perfect child among all the siblings. On the surface she seems too perfect, but as the film progresses Kies shows April’s hidden flaws and secrets in a compelling way. The true star of this film, in my opinion, is Ryan Leigh Seaton (NerdGirls, Dogs & Me) as Penny. Penny is the black sheep of the family and Seaton plays her as the sarcastic sibling who hates everyone incredibly well. Seaton also has some of the most hilarious lines and her delivery will leave you in stitches. While the entire cast is really fun to watch, Seaton is likely the one who will be remembered the most.

It’s safe to say that there is a lot of blood in this film. Fans of gore will not be disappointed. On top of that, there are some really unique kills. The film even opens with a fight from the point of view of a snow globe, which ends up being used as a weapon. This allows the filmmakers to show some very creative effects. All the attacks, from severed heads to cut Achilles tendons, are grotesque and thrilling.  Not only are these kills creative and even funny at times, but the practical effects look amazing as well. There is a level of campiness with the amount of blood and gore, but it fits in very well with the tone of the film.

Secret Santa is the holiday horror film to watch when you want to see a family that is more dysfunctional than your own. It is equal parts carnage and laughs, with outrageous characters that have you laughing and screaming from start to finish. This is the kind of film that you go into knowing it is meant to be humorous, gory, and campy. Slasher horror comedies with this kind of humor and gore can be an acquired taste, but they can also be some of the most fun experiences you’ll have in watching a film. This film will clearly become a holiday staple for horror fans.