After a successful first episode, it’s time for episode two of Shudder’s hit new series, Creepshow. This week features two tales that lean more towards the comedic side compared to what fans saw in episode one. The two stories told in this episode are “Bad Wolf Down” and “The Finger.” These are two very different tales, but each one is sure to deliver the laughs.

The episode starts with “Bad Wolf Down.” This segment is written and directed by Rob Schrab (Monster House, The Sarah Silverman Program). The plot follows a small band of American soldiers fighting Nazis in France during WWII. They are forced to retreat and take shelter in a small building that once served as the jail for the remote area. Inside the men find a French woman locked inside the jail cell. Yet this woman isn’t as helpless as she appears.

“Bad Wolf Down” definitely takes the audience back to 80’s b-horror films with clunky dialogue, overacting, and somewhat laughable practical effects. This is clearly a deliberate choice made by Schrab. It is an intentional cheesiness that creates a hilarious throwback for horror fans. The most humorous aspect is the dialogue. Much of what the soldiers say to each other is so over the top and stereotypical of what you might expect soldiers to say to each other. It’s almost impossible not to laugh.

Of all the actors in this segment, horror fans will immediately recognize Jeffrey Combs (Re-Animator, From Beyond) as the vengeful Nazi commander, Reinhard. Combs is a gem and a great comedic actor, which leads me to believe his absolutely atrocious German accent is another purposeful choice to add to the humor. The other standout performances come from Dave MacDonald (Stranger Things, Doom Patrol) as Captain Talby, Scott “Kid Cudi” Miscudi (Need For Speed, Two Night Stand) as Doc Kessler, and Callan Wilson (A Mermaid’s Tale, All Hallow’s Evil: Lord of the Harvest) as Pvt. Rivers. 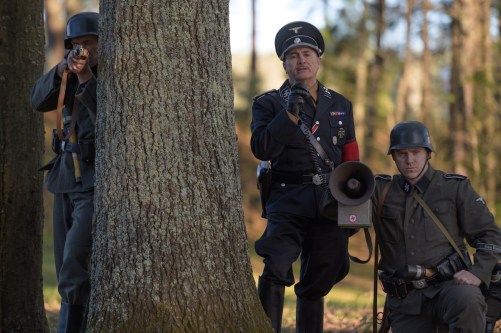 So far, “Bad Wolf Down” has utilized the comic book style that normally bookends the stories more than any other segment. Some of this is more subtle, like including the blue and red backlighting fans will likely recognize from the first Creepshow film. Since this is a werewolf story, there is naturally a scene where the viewer is shown people transforming from a person to a wolf. Schrab and team wisely used the comic book style to show the transformation in an animated comic panel rather than blowing the budget on practical effects. It looks great, is smart and unique, plus it adds to the humor. The werewolves themselves are also a bit on the cheesy side, but each wolf has a really fun and individual look to them.

From there our beloved creep flips open a new comic for the second segment. This one is titled “The Finger.” Written by David J. Schow (The Crow, The Texas Chainsaw Massacre [2006]) and directed by Greg Nicotero (The Walking Dead), the story introduces viewers to a man named Clark. Clark likes to collect things other people would likely consider garbage. One day he finds a weird, shriveled up finger. He takes it home and realizes it is growing; first an arm, then an entire body. He names the strange creature Bob and cares for it, but Bob has a murderous way of showing his affection.

This is an absolutely laugh out loud story. “The Finger” stars DJ Qualls (Supernatural, The Core) as Clark. Clark is kind of a loner, so when Bob comes into his life he’s happy to care for the strange creature. Qualls’ performance is hysterical for two main reasons. First, he often breaks the fourth wall to talk directly to the audience, giving amusing commentary and summarizing events to save time. Second, he reacts to the bloody things Bob does the same way someone might react to their cat being annoying or bringing him a dead mouse. It is entirely relatable, but taken to such an unbelievable extreme it is sure to make viewers crack up.

“The Finger” also includes amazing practical effects. From the lone finger to the body that eventually grows out of it, Bob is a gross and creepy little creature that you also want to cuddle because he’s so cute. It is great creature design that fans are sure to remember as the series continues. On top of that, the little presents Bob brings home for Clark are also very well done. The entire episode is filled with fantastic practical effects, as one would expect in something directed by Nicotero.

Episode two of Shudder’s Creepshow took the series in a much more humorous direction. Both “Bad Wolf Down” and “The Finger” deliver laughs, although they are very different types of humor. On top of that, the performances are highly entertaining and the practical effects are delightful, even the somewhat hokier werewolves of “Bad Wolf Down.” Just like the first episode, be sure to look for the hidden Easter eggs in episode two, including a special quick cameo in “The Finger.”

The second episode of Creepshow will be available to stream on Shudder on Thursday, October 3rd. You can also watch it live on the Shudder channel at 9pm EST/6pm PST the same night.