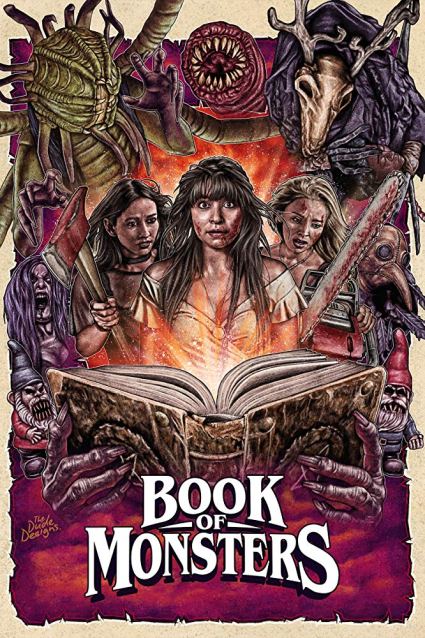 When Sophie was little she thought she saw her mom get killed by a monster. Now, on the eve of her 18th birthday, Sophie and her friends are throwing a party. Her mom’s old monster book resurfaces only to be used by a mystery woman to conjure up some terrifying monsters to wreak havoc on the party guests. It’s up to Sophie and her friends to stop the monsters before they are unleashed on the world.

This gory monster comedy feels like a love letter to horror films of the 80’s. Written by Paul Butler (Nothing Man, The Creature Below) and directed by Stewart Sparke (The Creature Below), Book of Monsters brings campy fun with what appear to be nods to The Evil Dead films while also delivering an interesting and unique plot. The cold open of this film introduces the audience to a young Sophie as her mom reads her a bedtime story from a rather odd book filled with drawings of strange monsters. Sophie then witnesses a monster kill her mother, but of course no one believes her. This quickly sets the tone for the film while also establishing the main character, Sophie. As a teen she is a bit of an outsider; she has a couple close friends, is shy and quiet, and it quickly becomes apparent that she is interested in girls. Her birthday party is the catalyst for the carnage which ensues on the unsuspecting guests.

On the surface Book of Monsters is simply a splatterfest where people are killed left and right and the monsters are a bit on the cheesy side. There are also some odd choices in terms of character development, such as a mean girl who is a bit over-the-top in her mean ways and Sophie quickly goes from meek to warrior woman at the drop of a hat. While some of these aspects can take away from the film, I believe they ultimately have a purpose. It all goes back to paying homage to horror films of the 80’s. The book filled with monsters and spells is reminiscent of The Evil Dead, the monsters themselves can be a throwback to many older films, the mean girl reminded me of Judy from Sleepaway Camp, and Sophie herself is like most virginal final girls of that time who fight for survival. Even the cast, who are all supposed to be teenagers, look like they are between the age of 25-30 just like in 80’s films. What makes Book of Monsters stand out from other films that honor the films of the past is the mythology it creates. Not only are the monsters unique, but the filmmakers gradually build on Sophie’s connection to them in an interesting way that moves the plot forward while also giving plenty of opportunity to create a sequel (or even a prequel) with this mythology.

The performances are a bit of a mixed bag, some being very good and others being over the top. That being said, I believe the range of performances as a deliberate choice by the filmmakers to stay in-keeping with the 80’s nostalgia. Lyndsey Craine (The Creature Below) stars as Sophie. While her character arc is a bit abrupt, Craine’s performance as Sophie stays true to the character. She starts out very shy and sweet, but when her friends are in danger she turns into a monster killer. Craine is also the most believable as a teenager. Two actors who are not believable as teenagers are Michaela Longden (The Creature Below, Audax) as Mona and Anna Dawson (1921, The Creature Below) as Arya. Mona is one of Sophie’s best friends and a bit of a rebel. What I enjoy most about Longden’s performance is her ability to play multiple characters and the way she injects humor into her performance. Arya is the bully of the film. She is so over the top in how terrible she is to Sophie, and others, that Dawson’s performance also comes across as out there. This seems intentional as many of the bullies of 80’s films act quite similarly to Arya. No matter where the performances fall on a scale of good to not so great, it is still easy to see that the actors had fun making this film.

Between the monsters and the gore, it is impossible to ignore the effects in Book of Monsters. Remembering that this film is meant to be like a campy 80’s horror flick, the practical effects definitely pay homage to that era. The filmmakers wisely avoided using CGI. The heavy use of blood and severed body parts is both disgusting and humorous at the same time. When it comes to the monsters themselves, there are some interesting choices made. A couple of the creature designs rely heavily on cloaks to mask much of the body, allowing the SFX team to focus more on the faces of the monsters and the weapons or body parts they use to kill the teens. It can be a bit unfortunate looking at the monsters and realizing the bodies are mostly ignored in the design process, but it still fits with the low-budget 80’s aesthetic. There is one creature the team clearly took more time and money to create, and the design is very unique. The only creature design I don’t like is for the “djinn.” Instead of having a true monster look, the djinn looks more like a ghost from a J-horror film. This could potentially be another nod or homage to that subgenre of horror film, but it seems out of place with the rest of the 80’s style.

Book of Monsters certainly delivers on the monsters and gore with a classic 80’s aesthetic, while also giving audiences a fun and compelling story. The plot feels reminiscent of other films while still including new elements. The actors may not all deliver the best performances, but there is obviously a lot of heart and fun that went into the film. Book of Monsters certainly isn’t a film for everyone, but if you appreciate classic 80’s horror films with campy practical effects then this is the film for you. It is definitely a love-letter to the misfits and monster lovers.