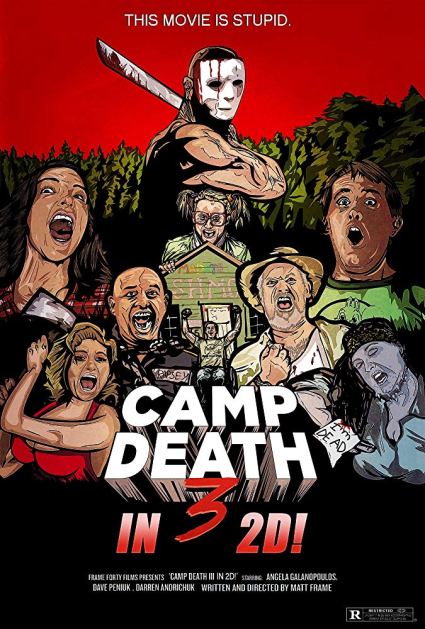 Camp Crystal Meph has developed a bit of a reputation. After a crazed woman going on a killing spree, then her murderous son returning to exact revenge, many have died on the property. When an overly-optimistic man decides to reopen the camp as a rehab center for mentally ill adults, it doesn’t take long for the body count to rise. Has the killer returned, or is there a copycat on the loose?

Camp Death III in 2D! is a horror comedy written and directed by Matt Frame (GGG: One Night Stab). It is an intentionally outlandish and campy spoof of Friday the 13th Part III in 3D. The film even begins in a similar fashion to the F13 films where the first few minutes recap the previous film, although in this case it is a film that doesn’t really exist. There are other similar plot points connecting Camp Death to the F13 films in fun and creative ways. That being said, this film is intentionally out there, campy with ridiculous effects and acting, and can be a bit abrasive at times. This is all on purpose. Some of the taglines for the film read “This movie is stupid,” “This movie is super stupid,” and “The most horrible movie ever made!” It clearly caters to a specific group of horror fans that not only enjoy the F13 franchise, but also loves the ridiculous, low-budget B-movie style the film has.

While it’s not the most horrible movie I’ve ever seen, despite what the taglines suggest, it definitely isn’t my cup of tea. I appreciated the nods it gave not only to F13, but other popular films as well. There is one scene specifically that I got a kick out of that is a hilarious nod to the Star Wars films. There is also a bit with a squirrel utilized in a few scenes throughout the film that I found very entertaining, and part of that is because of how ridiculous and low-budget it looks. There were times the jokes leaned a bit towards the offensive side. The laughs are centered around gross-out humor, sexual humor, and jokes that are aimed at the mentally ill campers. There are definitely people who will find these jokes funny, but it is not the kind of humor that I am entertained by.

This is the kind of film that is incredibly hard to accurately critique various elements. Acting is one of those elements. The performances in Camp Death III in 2D! are intentionally over the top, ludicrous, and just plain bad. If you take into consideration the fact that bad acting was the goal of the film, then in that respect the entire cast actually did a fantastic job. There is a lot of humorous overacting and some that is less humorous, but just as overacted. This also makes it more difficult for me to pinpoint any single performance because of how “bad” everyone was (even though that was the point). Instead I will throw nods to some of the performances I enjoyed watching even with the insanity. I will send shout outs to Dave Peniuk (The Coroner: I Speak For the Dead), Angela Galanopoulos (Michelle’s), and Katherine Alpen (Cubicle the Musical) for all being ridiculous yet still fun to watch.

As with the acting, the effects from Camp Death III in 2D! are incredibly hard to critique. The bizarre mash-up of CGI, practical effects, puppetry, green screen, close-up fisheye camera work, and interesting color choices will definitely grab your attention. The problem is that it might not grab your attention in a good way. Most of the effects are rather cringe-worthy in how poorly done they are, but as I’ve said multiple times in this review that low-budget look is intentional. Each of these different effects and tricks used have different levels of success. The scene I mentioned previously that relates to Star Wars is surprisingly well done. Most of the puppetry is also good for a laugh. This includes the scenes with the squirrel, which may have once just been a stuffed animal. Much of the CGI is hard to look at and even many of the practical effects are laughable, which is most likely on purpose.

There is definitely a subset of horror film fans who will get a lot of enjoyment out of Camp Death III in 2D! I simply was not one of those horror fans. The filmmakers are very successful in the sense that they created the outlandishly insane and cheesy film they set out to make. It ticks all the boxes for a low-budget B horror film, especially ones from the 80’s. I wouldn’t be surprised if this film eventually gained a cult following in the way that films like Troll 2 did over the years. Will I watch it again? Probably not, but it was definitely a memorable hour and 20 minutes.