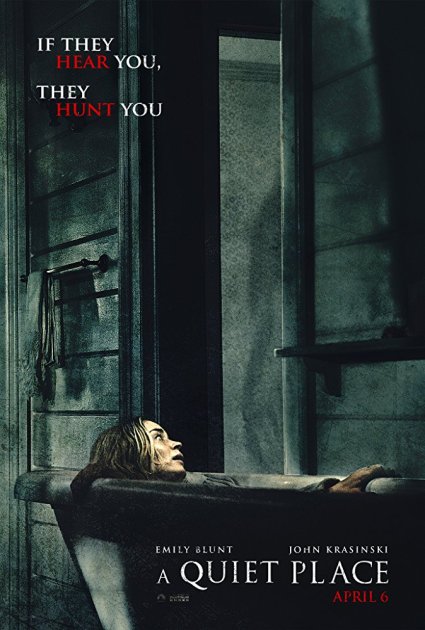 In 2020 the world is taken over by strange and dangerous beings. While the creatures are completely blind, they have a heightened sense of hearing. The human race has been almost entirely wiped out. One family struggles to survive this new world where a single sound could mean death. They have the advantage of knowing sign language, but it might not be enough to remain silent.

There are so many things to love about this film. John Krasinksi (The Office, Away We Go) made sure to have his hand in nearly every aspect of the filmmaking process. He directed the film, co-wrote the script with Bryan Woods (Nightlight) and Scott Beck (Nightlight), and he also stars in the film. The plot focuses more on the family unit rather than the creatures, yet the creatures are quite terrifying. We know generally when they appeared, we know the creatures are blind and hunt using sound, but that’s about it. The filmmakers smartly avoid showing the creatures in full view until fairly far into the film. Many horror films try to over explain the origin of the monsters, but this film allows you to make your own deductions.

Since the monsters hunt with sound, much of the film is in near silence. This makes every sound all the more terrifying, and the entire film has an edge-of-your-seat tension. This also means the words that are spoken have much more impact. Speaking is dangerous, so if anyone in the family says something out loud it is something they find important. The only daughter in the family is deaf. While normally this would be considered an impairment, it actually ends up being a benefit for the family because they could already communicate with sign language before the creatures appeared. This form of communication is likely a large part of what has kept the group alive. The dynamic between the family members and how they live their daily lives in this new world are the driving forces behind the plot. It is a monster movie, but the plot goes much deeper by having compelling characters.

Acting in a film with such a small amount of dialogue takes a lot of talent. An actor has to be able to convey emotions with their face and body language because they are unable to use words. Krasinski is one of the stars of this film playing the father, Lee. A striking aspect of his performance is his ability to convey emotion with his eyes. Krasinski has a very expressive face that serves his portrayal of Lee very well. His real life wife, Emily Blunt (The Devil Wears Prada, Edge of Tomorrow), plays his wife in the film, Evelyn. Blunt is a very talented actress who shines in every role she does. Her performance in this film really shines when she’s protecting her children. The physical and emotional struggle of trying to remain silent in tense situations is something Blunt portrays very well. The breakout star of the film is Millicent Simmonds (Wonderstruck) as Regan. Simmonds is deaf in real life, just like her character in the film. Not only is it great that the filmmakers opted to hire a young deaf actress in the role, but Simmonds acts her heart out. She shows that being hearing impaired does not mean you aren’t as strong and capable as anyone else. The entire family feels real and authentic, making the characters ones fans will truly care about.

The creature design in this film is stunning. While the look of the creatures may remind audiences of other creatures from Stranger Things and Cloverfield, there are certain aspects that make them unique. We know the creatures hunt using sound, so naturally there are certain physical aspects to show they have enhanced hearing. These physical features look anatomically plausible, which always makes for a more compelling monster. The creature is masterfully created using CGI effects. The effects look startlingly realistic and include intricate details which would be difficult to achieve without CGI. While the origins and motives for the creatures remain a mystery, they are frightening and fun to watch.

A Quiet Place perfectly uses silence to generate high intensity into this monster flick. While it is suspenseful and exciting, it is also a film about the dynamics between family members in a post-apocalyptic world. The film has strong performances, fantastic creature design, and a unique story. This may be a bit nit-picky, but the biggest fault I find with this film is the very last shot of the film. Something about it feels somewhat out of place with the rest of the film and almost cheapens the previous events a bit. That issue aside, this film is one that every horror fan should see, and it is one that you could even bring your non-horror loving friends to enjoy.