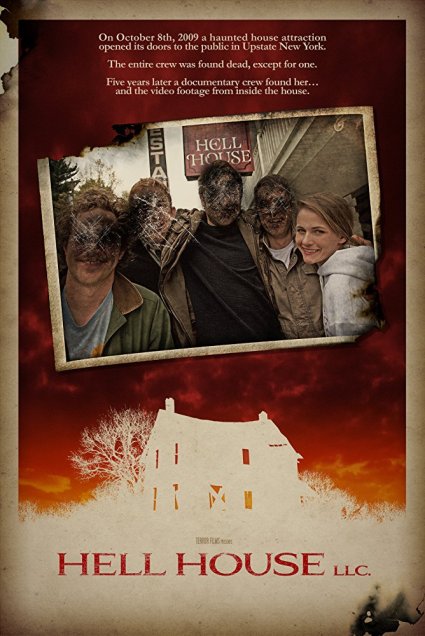 Five years ago several people were killed in a haunted house attraction due to an unknown malfunction. The dead included many patrons as well as most of the crew. Now a documentary team is trying to put the pieces together and discover the truth of what happened that night. When a survivor of that night comes forward with new information the documentary crew decides to go back to the site of the haunted attraction. They soon discover some doors are better left closed.

Hell House LLC seems like it would be just another found footage film. While is doesn’t reinvent the subgenre, it definitely excels at it. The plot is interesting, focusing on a group of friends who build haunted house attractions for Halloween every year. This year the hotel they choose for their attraction has a very dark history. Over time things become more bizarre, leading to the disastrous opening night. This is entertaining enough, but what makes Hell House LLC stand out is the characters, the logic, and the subtle scares (most of which I will discuss later). What I will say now is that one of the most difficult things for a fount footage film to achieve is a reason for the characters to keep filming, even when things have gone horribly wrong. The filmmakers do an excellent job, for the most part, of logically explaining to the audience why the footage continues past when many people would stop. There is only one scene that leaves me with more questions than answers, but it doesn’t disrupt the filming logic.

I had the opportunity to watch this film twice in a very short period of time. The first time I watched it on a streaming service per a recommendation. The second time I watched it after receiving an email from the filmmakers with a screener for the extended director’s cut version. When watching the director’s cut I expected the aforementioned scene to be extended and further explained, but sadly it was not. It strongly hints that there is something more going on beyond what is shown to the audience, but we never get to learn what that is. While both versions of the film are great, I would recommend the extended director’s cut as it provides more character development and shows a bit more of what happened on opening night.

The most important thing I want to say is, despite watching the film two times in roughly two weeks, I was terrified during both viewings. A statement from writer/director Stephen Cognetti said, “My intent for Hell House LLC was to produce a slow burn of subtle, yet building scares. I have never been a fan of jump scares or music aided scares. My favorite type of scares in horror has always been the little things caught in the background that the protagonists are not immediately aware of. I worked to embody these sensibilities in Hell House LLC.” I too prefer the subtle scares in horror films. I can say that Cognetti skillfully achieves his goal, resulting in a truly frightening film. He creates the kind of subtle scares that stick with audiences long after the film has ended.

In a found footage film it is important the characters come across as compelling, and the characters must also have great chemistry. Nothing can ruin a found footage film more quickly than an unlikable cast. Hell House LLC has a cast of characters that are very well acted, and the chemistry between them feels very genuine. While the entire cast is fantastic, there are two standout performances for me. The first is Ryan Jennifer (I’d Kill For You) as the lone female of the group, Sara. Jones perfectly conveys trying to be one of the boys, experiencing fear, and balancing that fear with trying to be supportive of the team. Gore Abrams (Let Me Make You a Martyr) also stands out as Paul. Paul is a bit of a typical stereotype often found in modern horror films; the somewhat perverted friend with a heart of gold. What makes Abrams’ performance so memorable is how genuinely funny and enjoyable his character is. Even while his character is the focus of many scares, Abrams still manages to do or say something that delivers a laugh. Honorable mention goes to the remaining actors who made up the Hell House team; Danny Bellini (The Drifter), Jared Hacker (Pact), and Adam Schneider (Dark Skies).

If you enjoy quality found footage, and find subtle scares to be the most terrifying, then Hell House LLC is the film for you. It is the perfect Halloween horror flick to watch with a group if you want a good scare. There are only a few minor details that could be altered to get rid of one or two unanswered questions. Hell House LLC has compelling characters, chilling scares, and a simple yet interesting story. As someone who has seen this film more than once I can also say the scares hold up on second viewing. If my review has convinced you to see the film, I would suggest putting in the extra effort to see the director’s cut. This film will likely become an annual Halloween must-watch.