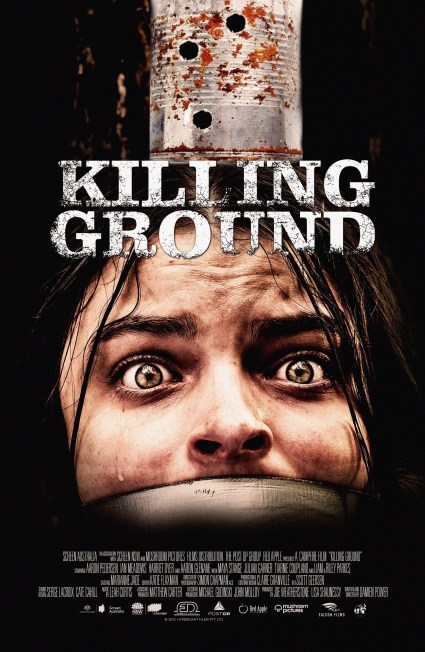 A couple goes on a New Year’s Eve camping trip in the Australian Outback. When they reach their lonely campsite the couple notices another tent. After staying one night they realize the owners of the tent haven’t returned. It soon becomes clear that something bad happened to the fellow campers. When the couple finds a toddler wandering alone near the campsite they decide it’s time to get help. Soon the couple regrets ever coming to this seemingly idyllic campground.

Killing Ground has a plot that isn’t extraordinarily original. It is an intense thriller packed with rape, torture, and murder. Yet there are aspects of this film that make it stand out from other films with similar plots. One interesting part of the story is that it is told in a more modular format rather than a linear story. The main focus is the young couple, but we learn fragments of what happened to the family whose tent gets left behind. It is very effective storytelling to show the two storylines side by side, while one is in the past and one the present, until the two finally converge. It adds a bit of interest to an otherwise average story. Another element that adds intrigue to the plot is the addition of the toddler. Saving yourself from murderous people is difficult enough on its own. Add a child into the mix and things become much more stressful and chaotic.

There are two main pieces of the plot that I need to commend the filmmakers for. The first has to do with the rape in this film. The filmmakers made the wise decision to show what happens before and after, but not the act itself. Seeing the aftermath of a rape scenario can be effective in getting the point across to audiences without having to show the rape take place. In the wake of remakes like Last House on the Left and I Spit on Your Grave, I appreciate the less is more approach used in Killing Ground. Another aspect the filmmakers do an excellent job with is creating honest reactions to the events taking place. I won’t go too far into it because it may reveal some spoilers, but I will say in most thrillers the characters always somehow manage to keep a cool head and someone always comes in to be the hero. While I’m not saying this doesn’t happen in Killing Ground, many of the actions by the characters are more realistic and people react in ways I personally have always thought people would truly do in these situations.

This is yet another film from the International Horror and Sci-fi Film Festival that is very well acted by the entire cast. Specifically, the four leads do a fantastic job. Aaron Pedersen (Goldstone, Jack Irish) plays level-headed and deadly German. He is almost a mentor in this film, but unfortunately he teaches his pupil ways to maim and kill without getting caught. Pedersen’s performance is quite unsettling because of the way he portrays German’s calm demeanor, no matter what is going on around him. Aaron Glenane (Molly, Truth) is also fantastic as Chook, German’s willing student. Glenane’s performance may be even more disturbing than Pedersen’s. At first Chook seems a bit unsure of what the diabolic duo are doing, but once he gets a taste for blood Glenane shows us how much enjoyment Chook gets out of it. The two are polar opposites, German being calculated and relaxed, Chook being erratic and inexperienced. Another strong performance comes from Harriet Dyer (Love Child, Down Under) as Sam. Dyer portrays Sam as a sweet and caring person with an inner strength that allows her to step up when she needs to. Then finally there is Ian Meadows (The Wrong Girl, The Turning) as Sam’s medical school boyfriend Ian. Ian’s medical background makes him a helping kind of person, but he is still human, and Meadows shows that side of Ian perfectly. The common thread between all four of these characters, especially the couple, is that their actions and reactions feel authentic. They make the audience feel less like they are watching a movie, and more like they are watching actual horrific events.

Killing Ground is one of the most disturbing films I have seen in recent years. It’s not necessarily because of the events that take place, since those are things seen in other films, but it is because of the way the characters are written. While there are clearly “bad guys” in this story, there are still good people who make poor decisions. It blurs some of the lines that distinguish good and bad, and the actors that play these characters do a phenomenal job. This is not a story for the faint of heart, but it is truly an intense and grisly film.