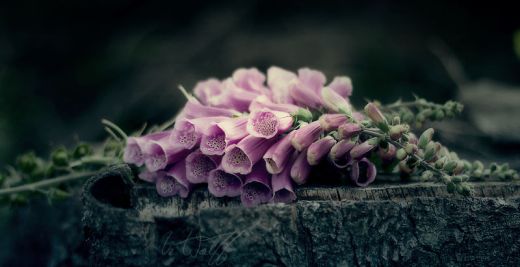 In a remote area of Western Ireland, an engineer lives with his young daughter. He is there to continue work on a wind turbine project. The engineer decides to sign off on building more of these turbines, despite concerns of the environmental impacts. Soon after, it becomes clear that he and his daughter are being targeted by something ancient, and it is not pleased by the changes to its land.

I was lucky enough to get to view this short by director Brian Deane after discussing his previous short, Blight. While the two shorts are very different in theme and plot, they are both frightening tales. Foxglove is a chilling story set in modern times. What I really love about the plot is that it takes a modern concept like finding renewable energy and adds in elements of ancient folklore. Most of the folklore that is referenced in this short comes from old stories about fairy folk and fairy rings. Even today, folklore is a part of Irish tradition. The film made the combination of these two opposing aspects meld together to create a fascinating plot. While I will spare specific details, I will say the end of this short film made my jaw drop in the best way possible. It was simple, yet shockingly effective.

The acting in this short was also quite powerful. Bob Kelly (1916 Seachtar Dearmadta) played Dave, the engineer father. It is clear that Kelly’s character is concerned about the environmental impact of his wind turbine project, but circumstances are keeping him from taking the time to make sure it is safe for the environment. When his actions lead his family into darkness, the desperation that a father feels when protecting his child comes across as intense and genuine. Not only did Kelly star in this short, but he wrote it as well.

Foxglove makes excellent use of “unseen” characters. Throughout the story you hear the fairy folk speaking to Roisin, the young daughter. While we cannot understand what they are saying, or see them, Roisin clearly does. It almost makes it even more menacing not to see the very thing you are supposed to be afraid of. On the other hand, the wind turbines are also a bit of an unseen character. The turbines are shown from time to time, but even when they are not on screen you can hear them around the house. During the final moments of the short, the sounds from the wind turbines act as a score. It is a very effective approach that adds to the intensity of the last few moments.

I’ve said it before, and I’ll say it again: what makes a short successful for me is that it works in the small run time it has, but it leaves me wanting more. This is a short I can easily see becoming a feature length film. What I would especially love to see is the plot going deeper into the ancient folklore surrounding the fairy folk. Luckily, I knew a bit about the stories from other films and books, but some viewers might not be as aware. When this short becomes available online, or if it is showing at a festival near you, run, don’t walk, to see it. Foxglove is a chilling story that brings the dark side of fairy tales into the modern age.