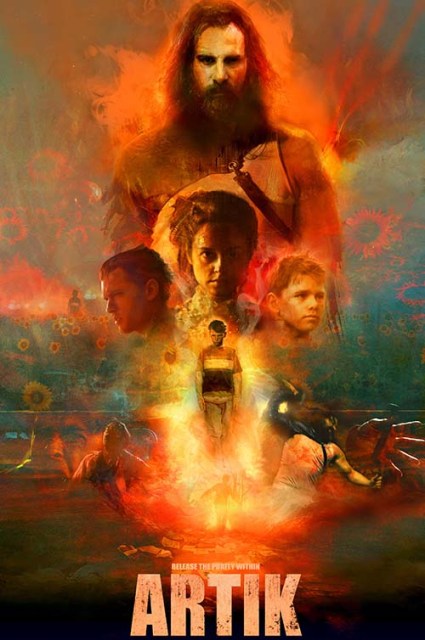 A group of young boys live on a remote farm with their mother and father. The eldest boy helps his father with some strange tasks, including finding individuals to torture and murder. When the boy meets a man named Holton, who shows him kindness, the life the bizarre family has built is threatened.

Writer and director Tom Botchii Skowronski creates a very unique and strange debut feature film with Artik. The genre bender includes elements of a thriller, sci-fi, and even a bit of superhero flair. The plot follows Boy Adam, a young boy who is seemingly being groomed by his father figure, Artik, to continue his work. Artik is obsessed with comic books and is clearly on some kind of quest to find a certain type of person, yet in most cases he simply ends up brutally murdering these people. Then Boy Adam meets Holton. Holton is a straight-edge man who is likely the first to show the boy any true kindness. That moment is the catalyst that sets the rest of the film in motion as the boy realizes there could be another way of life and Holton attempts to help him. After the disturbing opening, the film takes on more of a gradual build of suspense leading up to the bloody, violent climax.

Artik at first feels like it takes place in an alternate reality. The way the world looks from the boy’s point of view on the farm leads the viewer to believe the world is a dangerous and desolate place. It’s when Holton is introduced that the world of Artik comes back to reality. It’s a very effective bit of filmmaking because it shows how Artik’s delusions influence the boy’s point of view. To him the world is a dark and dangerous place, until Holton shows him the world outside the farm is very different from what he has been lead to believe.

The film is very unique and builds suspense well, but it also leaves a bit too many unanswered questions. For one, Artik’s comic book obsession is almost a bit too subtle. There are some great visual cues including a target with Loki’s face in the center, comic book style drawings of Artik committing his crimes, and even the outfit Artik wears when he commits these crimes makes him look an awful lot like The Winter Soldier. While I don’t mind not knowing where this obsession came from, I wish it was a bit more clear how this obsession dictates his actions. The audience learns early on that Artik is looking for a specific person, or type of person, and that is why he maims and kills. It isn’t until the climax of the film that it is revealed what qualities he is looking for in these people, but it is never fully explained why he wants them. It is also unclear if the boys on the farm are truly Artik’s children or if they were kidnapped and raised on the farm, but the mystery around this doesn’t necessarily detract from the plot.

One of the high points of Artik is the performances. Indie horror fans will likely recognize many of these faces. Chase Williamson (Beyond the Gates, Sequence Break) stars as Holton. He is an interesting character because on the outside he is covered in tattoos, dresses tough, works in a metal shop, and generally looks rough around the edges. Yet his character doesn’t do any drugs or alcohol and immediately shows kindness to a strange boy spray-painting the side of the shop. He is obviously a purely good person. Artik is played by Jerry G. Angelo (American Warfighter, Color of Souls). Angelo is an imposing figure and his portrayal of Artik is incredible to watch as you see him force his decisions on those around him and manipulate the boy to do his bidding. Other great performances from horror fan favorites come from Lauren Ashley Carter (Imitation Girl, Jug Face) as Artik’s wife, Flin Brays, Matt Mercer (Contracted: Phase 2, Beyond the Gates) as addiction counselor Kar, and Gavin White (14 Cameras) as Boy Adam.

The artistic elements, from the score to the practical effects, are all stunning. The film’s score, by Corey Wallace, matches the dark and gritty look of the film and adds to the suspense perfectly. The practical effects in Artik are very well done. There is a fair amount of blood and gore in this film, so the practical effects are a vital part of the storytelling. Each wound and kill are executed quite well, especially one rather gruesome scene involving a fork. Even the set design and wardrobe help with the storytelling of Artik. The most notable of these is the outfit Artik wears when he kills, which I mentioned before as looking similar to The Winter Soldier, aka Bucky Barnes. Fans who know more about that character know he has a sordid past, yet as a whole the character is typically seen as a hero. This likely indicates that is how Artik sees himself. It is the attention to detail like this that really add to the overall appeal of the film.

Artik is a tense film that will appeal to those who love gritty horror and comic books. Skowronski proves he knows how to create compelling characters and build tension within the plot. That being said, there are aspects of the film that remain too vague and unexplained. There are also aspects of the film viewers might not understand as well if they aren’t familiar with the comic book references. Yet the film still combines stunning artistry and a cast filled with indie favorites to bring in a wider horror audience. Between the music, gore, and performances, this film is definitely worth checking out.