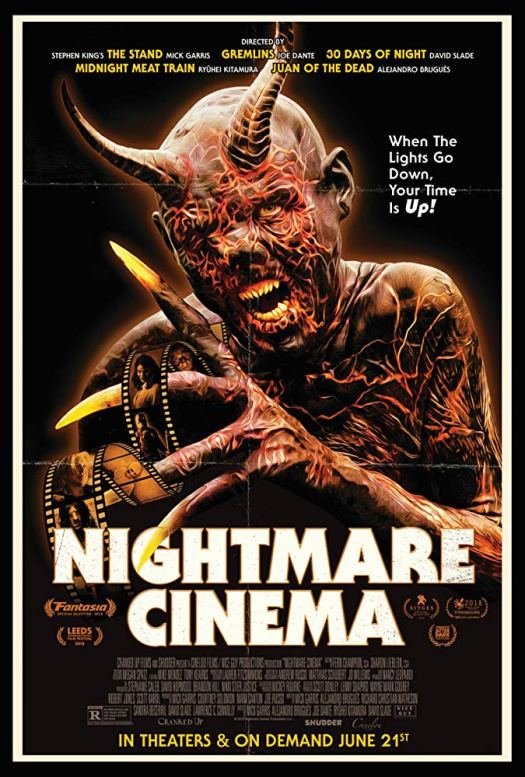 One by one, people are drawn to a seemingly abandoned movie theater. As they take a seat in the empty rows the lights go down and the projectors starts up. What these people see on screen is their worst nightmares. Each person must face their fears. Then they must face the projectionist.

Horror fan-favorite Mick Garris (Hocus Pocus, Sleepwalkers) brought his latest Masters of Horror-like film, Nightmare Cinema, to the Portland Horror Film Festival. In this film, Garris brought together other well-known horror directors to create an anthology that touches on many different subgenres. The connecting plot is by Garris himself and revolves around characters from each segment being drawn to the old movie theater. Once inside, a creepy projectionist shows them their greatest fears on the big screen. From there the film goes into different segments, each with a very different look, feel, and tone.

The first is written and directed by Alejandro Brugués (Juan of the Dead, ABCs of Death) that starts out as an 80’s style slasher, but quickly turns into something else. Then the audience is shown the more horrific, if not darkly funny, side of plastic surgery directed by Joe Dante (Gremlins, The Howling). From there we get a more traditional demonic possession segment directed by Ryûhei Kitamura (Midnight Meat Train, Versus) that has an epic climax. Writer and director David Slade (Hard Candy, 30 Days of Night) takes on the fourth segment with a black and white Twilight Zone-like story about a woman who is struggling to keep hold of her sanity as she sees monsters all around her. Finally, Garris returns in the last segment in his heartwarming supernatural thriller about a boy in a hospital who can see the dead.

What makes this anthology work so well is that each chapter feels entirely unique and independent from one another. Yet, at the same time, the overarching story of the projectionist and his empty theater acts as a fantastic connector between each segment. The film also delivers a little something that every horror fan can enjoy. There are parts that are in the realm of horror-comedy, some of it is supernatural and eerie, and there are even some aspects that venture into the sci-fi side of things. I personally enjoyed each chapter of the film, but even if others don’t, there will at least be one segment that tickles their fancy.

There are a wide array of acting styles in Nightmare Cinema, and each of them is incredibly entertaining. Each actor does a great job of molding their performances to fit with the tone of the segment they are acting in. There are a few select performances that stand out. One of the most powerful performances comes from Elizabeth Reaser (The Haunting of Hill House, Ouija: Origin of Evil) in Slade’s chapter, “This Way to Egress.” Reaser plays Helen, a mother struggling to determine if the world she sees around her is real or all in her mind. She acts with her entire body, showing the depth of her tension and anxiety in a powerful way. A surprise performance can be seen in Brugués’ segment, “The Thing in the Woods,” in the form of Sarah Elizabeth Withers in her first feature film role as Samantha. What I love about Withers’ performance is how she perfectly captures the acting style of classic 80’s slasher final girls. While these two performances are my favorite, it is a difficult decision to make because everyone truly does a wonderful job.

With each segment of Nightmare Cinema being completely different, there is a wide variety of effects used. For the most part the various chapters utilize practical effects. This can be seen in everything from corpses, extreme plastic surgery, people with monstrous faces, and more. All of it is beautifully done and enhances the stories being told. CGI effects are used a bit more sparingly, aside from certain scenes in “The Thing in the Woods” segment. The CGI in that story can look a bit cheesy, but it is in keeping with the classic 80’s theme. It is clear that a lot of thought was put into each effect and how they could be used to add visual interest to each chapter.

Nightmare Cinema brings together horror greats to create a variety of chilling tales to appeal to every kind of horror fan. Each chapter is completely unique when compared to the others and each one is highly entertaining. There are shocks, laughs, scares, and everything in between. The various segments are filled with fantastic performances and amazing effects that only help to make each story all the more fun to watch. Mick Garris clearly knows how to gather the best directors to create brilliant works of horror. I hope Nightmare Cinema is just the first in what has the potential to be a fantastic anthology franchise.