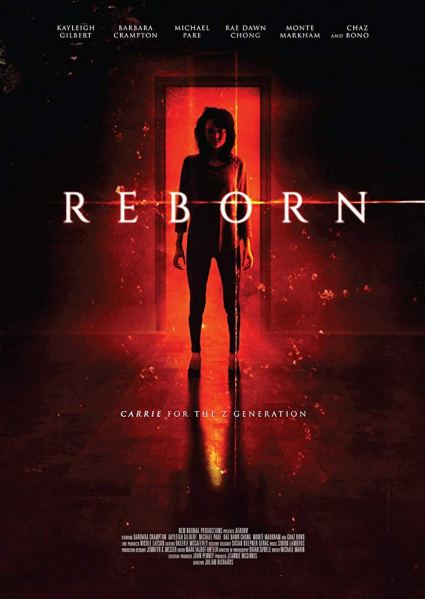 On a stormy night, a stillborn baby girl is brought back to life in the morgue by an electrical surge. The morgue attendant takes the baby home, never telling the mother her baby is alive. 16 years later the girl escapes the torment of her adoptive home. Now she searches for her mother and she won’t let anyone get in her way.

This year, the Portland Horror Film festival introduced Portlanders to Reborn. This film is directed by Julian Richards (The Last Horror Movie, Summer Scars) and it is the feature film debut of writer Michael Mahin. The film begins by showing the strange attendant working in the morgue when suddenly a storm causes a bolt of electricity to bring a stillborn baby back to life. The film then jumps 16 years later. The mother is an actress who is having a hard time finding her inspiration, and the daughter is trapped in a horrific life with the morgue attendant. On the girl’s 16th birthday she manages to escape and track down her real mother. The girl is clearly unstable from the horrific life she had to live and she is so determined to reconnect with her mother. What takes her determination to a whole new level is the fact that her resurrection also gave her electrokinetic powers, which she uses to destroy anyone who tries to get in her way.

Reborn offers audiences an intriguing and suspenseful film, but it’s not without its flaws. One of the biggest issues is that the film often goes back and forth on how the daughter is portrayed. Early on she is shown as a victim of obvious abuse from her “adoptive” home. This leads to some obvious mental issues that accompany being held captive and likely tortured for 16 years. As the film progresses, she becomes more of a villain, obsessing over her mother and killing anyone who wrongs her. She also can’t seem to decide if she wants to reconnect with her mother or kill her as well. Again, this is likely due to the mental trauma she has experienced for years, but the back and forth happens so instantaneously that is ends up being more jarring than anything.

One of the stronger aspects of Reborn is the performances by the two leading ladies. Horror fans will immediately recognize Barbara Crampton (Re-Animator, Castle Freak) as the mother, Lena. This is actually the second film Crampton appeared in at PHFF, which is a testament to how beloved she is in the horror genre. While her character comes across as being a bit bland, Crampton is still enjoyable to watch as she brings Lena to life. Kayleigh Gilbert (Break Night) plays Lena’s electrokinetic daughter, Tess. Gilbert does a surprisingly good job of performing alongside Crampton. She also does a great job of showing the different sides of Tess from desperate to deranged. There is also a fun cameo by Chaz Bono (American Horror Story, Dirty) as Ken, the creepy morgue attendant.

At the beginning of Reborn there are some great makeup and practical effects used in the opening morgue scene. There is one cadaver that is featured quite a bit in this scene and it looks great. There is another body found later one that looks almost mummy-like which is also very well done. When the film gets to Tess’ kills, that is when the effects team loses me a bit. She uses her electrokinetic powers to shock people to death, and the CGI effects used to convey that electric power look very hokey. In one specific death scene I almost laughed out loud. Luckily, Tess’ powers are the focus of the film and the few deaths that utilize this power can be overlooked.

Reborn has great star power and an interesting concept, but it fails to really cash in on that idea. There are simply too many instances where the motivations and focus of the plot switch back and forth, making the tension wane. Tess’ power also seems to be almost an afterthought and more of a gimmick for them to use in death scenes rather than an integral part of the plot. It is a great first effort for Mahin and enough to make me interested in what he does next. The biggest draw for this film is clearly Barbara Crampton, and fans of her work will likely still enjoy this film enough for a watch, but it won’t stand out in her stellar filmography.