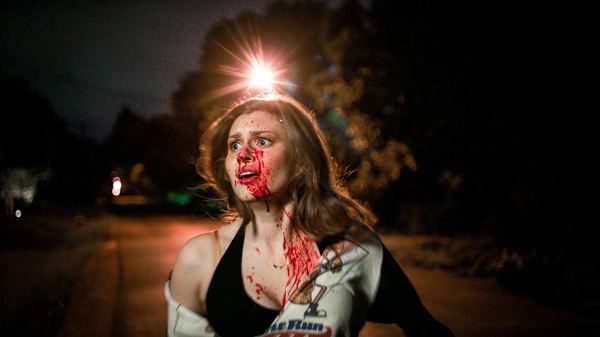 Sam is strapped for cash, so she takes a job delivering pizzas. After a terrible first day, she makes one last delivery to a rich part of town. After the customer stiffs her on the tip, she finds her way into the house and in the middle of a Satanic cult. Now they want her for their virgin sacrifice.

One of the most anticipated films of this year’s Portland Horror Film Festival is Satanic Panic. The film is directed by Chelsea Stardust (All That We Destroy, Seeing Green), who has been making quite a splash in the horror industry this year. The story came from both Ted Geoghegan (Mohawk, We Are Still Here) and Grady Hendrix (Mohawk), with Hendrix helming the script. I went into the film blind to the plot and actors, but it was impossible to escape all the buzz around this film. I had heard so many great things, and luckily the film did not disappoint.

Satanic Panic takes on a classic 80’s feel. The idea of “satanic panic” was prevalent in the 80’s, plus the film is equal parts gore and laughs. It plays perfectly into the idea that people are rich got that way by making a deal with the devil. The plot follows Sam, who is the sweetest, kindest, most innocent young woman without being annoying. The audience watches as her first day as a pizza delivery girl goes from bad, to worse, to deadly. The resulting chaos is a perfect mix of gore and humor as Sam tries to avoid becoming a virgin sacrifice. Despite her innocent nature, Sam has a knack for getting herself into trouble and then accidentally getting out of trouble in unexpected ways. Her interactions with the cult members are hilarious and the dynamics within the cult are even more hilarious. Watching as Sam tries to stay alive is highly entertaining and takes the audience down some unexpected paths.

I mentioned before that I went into this film blind, so I was shocked at the star power behind Satanic Panic. The film stars relative newcomer Hayley Griffith (Drew, All My Children) as Sam. She is probably the most sweet and innocent character I have ever seen in a horror film. Yet Griffith does a great job of showing Sam’s inner demons and her surprising ability to get out of dangerous situations. One of the most surprising appearances and performances in the film is from Rebecca Romijn (X-Men, Femme Fatale) as the cult leader, Danica. It’s great to see a female leading the cult, and Romijn is both fierce and hilarious in her role. In a smaller role as Danica’s husband, Jerry O’Connell (Piranha 3D, Stand By Me) makes an appearance as Samuel. His role may be smaller, but O’Connell’s performance is still memorable and brings the laughs. Finally, there is Ruby Modine (Shameless, Happy Death Day) as Danica and Samuel’s daughter, Judy. Judy probably has some of the best lines, and Modine’s deadpan delivery of her outrageous dialogue is sure to make her a crowd favorite. All of the strong female leads give the film a welcomed feminist edge. The entire cast from top to bottom is truly hysterical and had many opportunities to go over the top with their performances, but they straddled the line perfectly.

The film utilizes some fantastic visual effects that also feel reminiscent of the 80’s. Satanic Panic delivers quite a bit of carnage as the cult hunts down their virgin. It’s all very well done, although I wouldn’t necessarily say the guts and gore are realistic. Instead the filmmakers opted to stay with the 80’s feel and make the gore a bit more campy and bright red, which only adds to the humor of the film. There is even a running theme with the use of vibrant red between the gore and the outfits worn by the cult. It is a simple identifier to show the audience who is evil that packs a visual punch. On top of that the film has some gorgeous set design and even a bit of creepy creature design, making the film as stunning as it is funny.

Satanic Panic is a delightful gore-fest that delivers side-splitting laughs horror fans will absolutely adore. It further proves 2019 is becoming the year of Chelsea Stardust. The characters, the humor, the blood and guts, and the various twists and turns are perfectly balanced in this crowd-pleasing film. It is also the kind of film that is best seen on the big screen where you can laugh out loud along with the audience. You can still catch it on the big screen while Satanic Panic is still on it’s festival run, then it will be released in theaters and VOD on September 6th.