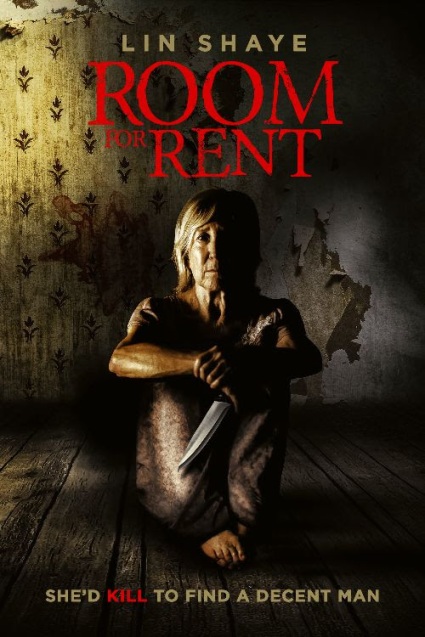 A recently widowed woman named Joyce realizes her late husband left her with nearly nothing to live on. To bring in some money she decides to rent out a room to guests as her own little BnB. When one mysterious guest takes up residence, Joyce becomes obsessed with him, leading her down a dangerous path.

Room for Rent is directed by Tommy Stovall (Aaron’s Blood) and it is writer Stuart Flack’s debut film. This thriller is unique in that the entire film centers around an elderly woman. It is very rare, especially in the horror genre, for the protagonist to be a woman of this age. What makes this even better is the filmmakers chose horror legend Lin Shaye to play the lead. The film begins in the moments after Joyce’s husband has died in an accident. In the days after his death, she discovers there is almost no money in their bank account, so she must come up with a way to earn some money. That is when she discovers the glorious world of renting out rooms online a la Air BnB, VRBO, and the like.

As Joyce goes from timid widow to entrepreneur, we also see the arrival of a handsome guest bring out a second sexual awakening in her. She changes from modest, monochromatic clothing to more revealing and brightly colored outfits to try and seduce the new man in her life. It ends up being an interesting character study of this woman, who is much more than she appears to be, as she becomes utterly obsessed with her guest. That being said, her character still is underdeveloped. Joyce’s motivation is unclear throughout the film, although one could assume her ultimate goal is to find someone to love her unconditionally.

While the basic premise of Room for Rent works in many ways, there are still a number of problems with the film. The look into Joyce’s psyche is great, yet underdeveloped. I also believe this is one of an increasingly popular subgenre of horror focusing on Air BnB type rentals and the horrible things that can happen in these places. However, there are just far too many subplot points that are hinted at, but the audience never gets a satisfying payoff. One example is that the renter, Bob, clearly has some very dark and illegal history that has brought him to this place. It is vaguely mentioned throughout the film in a way that implies it is important to the plot, but then his background is never explained and never lives up to that implied importance. This happens quite a bit when it comes to Joyce as well. She is a compulsive liar, but the audience never discovers the truth behind many of her lies. It also feels like the film hints that she may have had something to do with her husband’s death and yet there is no payoff at the end. The filmmakers seemed to have wanted to leave a lot left to the imagination of the audience, but they simply went too vague on many plot points. It unfortunately ends up also affecting the pace of the film, making it feel very slow and meandering with only a few moments of tension thrown in.

If it weren’t for Lin Shaye (Insidious, The Final Wish) in the lead as Joyce, the film wouldn’t have been as enjoyable to watch. Shaye is a force in the horror industry and she is absolutely delightful to watch. Time and time again I have wished to see her as the leading lady in a horror film, so in a way I got my wish with Room for Rent. Unfortunately, the film doesn’t quite live up to Shaye’s stay power. She gives a fantastic performance and often shines beyond what was written for her, but even her shine can’t completely erase some of the weaker plot points and dialogue. Oliver Rayon (In Transit) and Valeska Miller (First List) deliver passable performances, although I think the issues come more from some of the odd character choices by the filmmakers rather than their portrayals of those characters.

Room for Rent has all the right pieces to be a great thriller, but it fails to deliver on its promise. I wanted to love this film and I definitely tried. The idea of an older woman being the lead is one that many filmmakers shy away from, and I commend these filmmakers for making the attempt. It simply leaves many plot points too vague and doesn’t clearly convey what is driving Joyce with every decision she makes. It makes the film meander and move at too leisurely a pace to create any real tension. Lin Shaye helps to make this film more enjoyable to watch and I know many horror fans have wanted her to be the leading lady of a horror film for years. Yet even Shaye’s star power is dimmed in this otherwise dreary film.