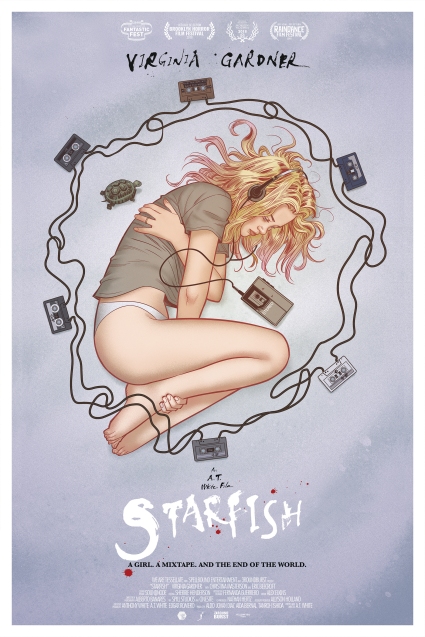 After losing her best friend, Aubrey secludes herself in her friend’s apartment. She awakes the next day to discover the world as she knows it is coming to an end. People have disappeared and there are strange creatures lurking outside the door. Aubrey finds a mix tape made by her deceased friend with clues as to how to survive this strange new world, and perhaps even save it.

A.T. White brings a powerful story to the screen in his first feature-length film, Starfish. The focus of the plot is grief. Aubrey loses her friend and from that moment her life is changed forever. The film includes elements of a dramatic character study, a Lovecraftian apocalypse, and fantastic music. Each aspect is integral to the film. White takes the audience on a journey through Aubrey’s grief, going through each of the traditional five stages; denial, anger, bargaining, depression, and acceptance. These stages are emphasized by the end of the world happening all around Aubrey and the strange beings that have crossed into our world. Her complete isolation from the rest of the world allows the audience to focus on Aubrey as she goes on her emotional and sometimes dangerous journey in which reality bends, breaks, and unravels.

Music plays a vital role in her journey as well in the form of tapes hidden by her deceased friend. Each tape contains a song with an embedded signal that has something to do with what is happening to the world. This gives Aubrey a goal to work towards and a mystery to solve. It propels forward, forcing her to face her grief and things she has done that she feels guilty about. The tapes could even save Aubrey’s life. All of these elements combine in perfect symphony.

The plot alone is haunting, beautiful, and fascinating, but what makes it even more compelling is White’s inspiration for it. White has said that he lost a friend to cancer and experienced grief like what we see Aubrey go through. The film allowed him to visually work through that grief. What’s even more amazing is that White intends to donate all the money he makes from Starfish to Cancer Research. It shows the passion he has for both his film and the cause. That passion can also easily be seen in every last detail in the film’s plot, character, and music.

In a film that focuses entirely on one character, casting is vital. Virginia Gardner (Halloween, Runaways) stars as Aubrey. The pain, loss, and guilt Aubrey experiences is the catalyst for the entire film. Gardner truly dazzles in the role. She is able to grab the attention and the hearts of the audience and hold on tight. The way Gardner portrays Aubrey as she mourns is complicated, relatable, and incredibly raw. This performance alone makes me excited to see what Gardner does in the future.

The many artistic elements of Starfish also bring a lot to the film. The filmmakers used CGI to create the Lovecraftian creatures from another world, as well as the rips in our reality they traveled through. These effects are relatively subtle. The CGI works especially well with the various sets. The film takes place in a landscape that looks very remote and snowy, which offers a beautiful contrast with the effects. There is also a distinct lack of modern technology throughout the film. This allows for the film to exist in a space without a specific time and could have been made in the 80’s as easily as today. Of course, the music is probably the most important artistic element because of how engrained it is in the plot. The score was composed by none other than White himself and he selected the music for the soundtrack as well. Both the score and soundtrack are a focal point of the film and I found myself trying to find the soundtrack online as soon as I finished the film.

Starfish is a stunning and raw journey through the grieving process as the world ends. White beautifully uses his own experience to take the audience through the stages of grief. He also incorporates music and the collision of different worlds to convey the end of Aubrey’s world. It seems to be left up to the audience whether this is a literal or metaphorical apocalypse, but the story is haunting either way. The weight of the film is carried on Gardner’s capable shoulders as she portrays Aubrey as a complicated heroine.  Add the various visual and musical elements, and you have a must-watch film. If that isn’t enough to convince you to see Starfish, see it so you can support a great cause and have your sale go toward Cancer Research.