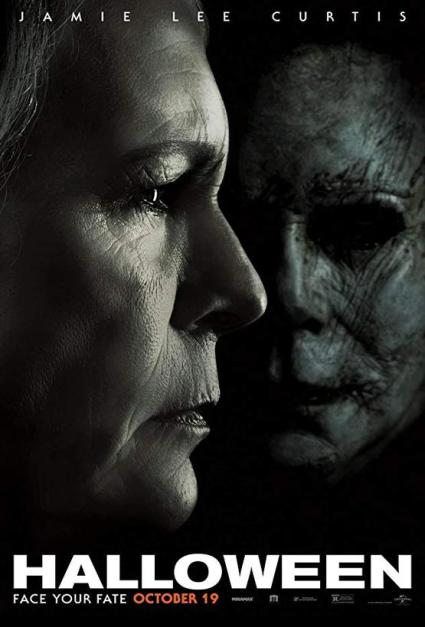 It’s been 40 years since Michael Myers escaped and wreaked havoc on the quiet town of Haddonfield, IL. In that time the lone survivor of the attack, Laurie Strode, has done everything she can to prepare herself and her daughter for the inevitable day when Michael would escape. The night before Halloween, her greatest wish and biggest nightmare comes true. Michael escapes, and his rampage will take him back to the town where it all began. It’s up to Laurie to finally put an end to it all.

At this point, horror fans should have an idea of where this film stands in the Halloween franchise timeline. If you’re unfamiliar, here is a quick refresher: Halloween (2018) is a direct sequel to the 1978 Halloween. Basically, forget every other story line after that first film, because they are irrelevant to this sequel. The screenplay for this new imagining of Halloween was written by David Gordon Green (Joe), Danny McBride (Your Highness), and Jeff Fradley (Vice Principals) and it was directed by Green. The trio brings an interesting mix of background from more serious films, to comedies, to this being Fradley’s first feature film. As a result, there are some aspects of the film that shine and others that don’t quite live up to the franchise.

One of the single most successful aspects of this film is that the filmmakers managed to make Michael Myers even more sinister and murderous than he was in the first film. He is an unstoppable force and his kills are far more gruesome this time around. The development of Laurie’s character is also fascinating. She becomes obsessed with Michael to the point where it completely takes over her life, and it feels like an authentic direction for her character after the trauma she endured the first time Michael escaped.

The filmmakers decided to include many scenes and Easter eggs throughout the film that act as nods to the original Halloween as well as the sequels, even the Myers-less Halloween III. It makes it fun for the audience to watch closely to see how many hidden gems they can spot. At some point the film begins to feel like there are too many different things going on. There are simply too many characters the film follows, too many subplots, and even the Easter eggs get to be a bit excessive. Some of the issues I have with the film could be attributed to there being three screenwriters with varying backgrounds. They likely all wanted to put their mark on the franchise while also honoring the film they know and love, but the plot ends up being muddled in parts because the focus moves from place to place instead of focusing on one or two characters. The third act is where the filmmakers clearly hit their stride. Not only is it the most exciting part of the film, it also finally delivers what fans have been waiting for these past 40 years. The focus tightens on Laurie and her family as they face off with Michael, and the madness that ensues is sure to delight fans.

Even though it seems like there are too many characters to focus on at times, the entire cast does a phenomenal job. The obvious shining star of the film is Jamie Lee Curtis (Halloween, True Lies) as the one and only Laurie Strode. Only Curtis could bring to life such an iconic character, and it is great to see her reprise her role. Curtis excels as she portrays Laurie simultaneously traumatized by the events 40 years ago, while also dedicating her life to preparing to kill Michael. Judy Greer (Cursed, 13 Going on 30) also solidifies her own scream queen status as Laurie’s daughter, Karen. The dynamics between the estranged mother-daughter duo allow Greer to deliver a strong performance, especially as she is forced back to her roots in the third act. A smaller role in the film that resulted in some scene-stealing moments shows Jibrail Nantambu (Preacher) as young Julian, who is being babysat on Halloween night. This kid is downright hilarious, even when his night takes a dark turn, resulting in some of the most memorable lines of the film. Honorable mention also goes out to Andi Matichak (Evol), Haluk Bilginer (The International), and Toby Huss (Rescue Dawn).

The artistry in Halloween (2018) is by far one of the highlights of the film. Right away it is impossible to ignore the drool-worthy cinematography, enhancing the tension and beauty of the film. The original film went for more minimal practical effects, primarily relying on blood to emphasize any wounds. This film cranks out the gore, giving fans some fantastic practical effects for grizzly, unique kills by Michael. The effects team really put in the effort to give the audience something that is both horrifying and believable, and they succeeded. On top of that, it’s impossible to talk about Halloween without talking about the score. John Carpenter returned for the music in this film along with his son, Cody Carpenter, and Carpenter’s tour guitarist/godson, Daniel Davies. The three composers did an absolutely fantastic job of bringing the classic theme that fans adore while also breathing some new life into the rest of the score. The score truly brings the film to life in a way that only Carpenter and co. could pull off.

Halloween (2018) is a love letter to John Carpenter’s original that only true fans could pull off. There are moments when the film diverges into to many different directions, but there are many things to love about the film. The film has many fantastic nods to the original franchise, as well as thrilling new material including an even deadlier Michael (complete with more graphic kill scenes) and a badder, stronger Laurie. Even Carpenter, Carpenter, and Davies’ score gives a fresh twist to the familiar. The third act is when fans will truly see the film shine as Michael and Laurie become the focus. While the film may not quite live up to the hype, and perhaps a rewatch after the hype has died down will shed new light, the film still has something for every fan to enjoy.

***Spoiler/Tip: There is an end credit “scene.” Don’t bother staying around for it. It’s literally just a black screen and you can hear Michael breathing, that’s it. You’re welcome.