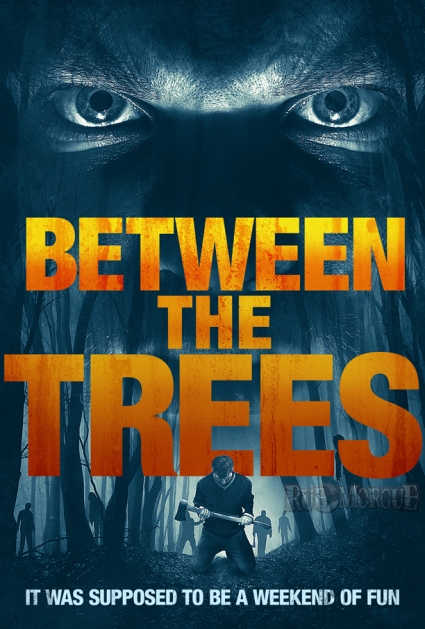 Dealing with the stress of a failing marriage, Steve arranges a getaway with his three best friends. Together they rent a remote cabin in the hopes of having a nice quiet hunting trip. It doesn’t take long for these friends to realize they are not alone in those woods. With no cell service and nothing but miles of forest around them, it will be a fight for survival. Only the fittest will escape with their lives.

Directed by Brad Douglas (Besetment) and written by first-time screenwriter Sam Klarreich, Between the Trees is a horror film that combines different subgenres. On the one hand the film is a suspenseful thriller as it follows Steve. He appears to be obsessed with his marriage falling apart and makes a point of asking his two married friends how their marriages are, while also telling them about his own failing marriage. Steve is clearly unstable, and the isolation only seems to exacerbate his deteriorating state of mind. On the other hand, this film is a creature feature. There is something else in the woods with the friends. They kill the offspring of the creature in self-defense, and then the creature tries to hunt them down one by one.

While individually these two premises could be great, and there are some areas of overlap that are quite interesting, they ultimately don’t fit together very well. With how the plot is revealed, it seems that the filmmakers were trying to use the creature aspect as a way to emphasize the tension between the four friends. Instead, the film comes across as two entirely different films, both in content and tone, rammed together like two puzzle pieces that don’t fit. Between the Trees is only an hour and 14 minutes long, but even with that short run time it feels too long. It would have worked so much better as two separate short films. At times the film becomes especially convoluted, mostly when it focuses on the creature aspect. It is the least developed subplot, and as a result viewers will likely be left wondering what this thing is supposed to be, among other questions.

Each performance in Between the Trees is fine, but the characters are all very one-note and lack any depth. Greg James (Wild) plays Steve. The character is written in such a way that leaves little room for James to bring a powerful performance. Steve is quiet, brooding, and only really cares to talk about his marriage. James tries his hardest to push beyond the character created for him, and has a few moments where he is able to show some real intensity, but the writing holds him back. This is a pattern with all the characters. Jonny Lee (Hacked) plays the drunken lady’s man, Mack. Again, Lee’s performance is fine, but there isn’t much more to the character than what I just described. Dan Kyle (Combat Report) portrays manly-man Dave. Dave is the big, tough guy who is the most capable hunter and woodsman of the group. Kyle manages to bring the slightest bit of depth to this character in the way he talks about his wife, albeit very briefly. Finally there is Michael Draper (The Competition) as Josh. This character is another stereotype; he is the most sensitive of the group, loves his wife, and dresses a bit too nicely for a weekend in a cabin so of course that means he is often called “gay” by the unsavory locals. Draper’s performance often goes into the realm of caricature, which doesn’t fit well with the rest of the film, but he at least is able to give us a few surprises with his character.

Normally creature design and practical effects are aspects of a horror film I look forward to most, but they are not great selling points of this film. Before we even see the creatures they are described in terms audiences are familiar with such as “Bigfoot” and “Sasquatch.” These words automatically conjure up visions of large, hairy ape-like beasts roaming the forests. When you finally see the creatures in Between the Trees, you get almost the exact opposite. The adult creature is definitely tall, but other than that these beings are hairless, have pale greyish skin, use bows and arrows, and wear human clothing. It comes across as though very little effort was put into the creature design, and the execution looks like a rubber Halloween mask. They are simply too human and it leaves a lot of lingering questions in the end about how these things could exist without the locals knowing about them.

Between the Trees can’t seem to decide what kind of film it wants to be. It tries very hard to marry two different stories into one plot, but it results in a confusing jumble. There are too many unanswered questions, especially when it comes to the creatures in the film. The archetypes for the four characters are fairly bland and leave little room for the actors to bring any tension or dimension to their performances. Most of the issues with the film can be chalked up to how the film was written and the unfortunate creature design. I appreciate the attempt at doing something different, but as a whole it is not a film I would recommend.