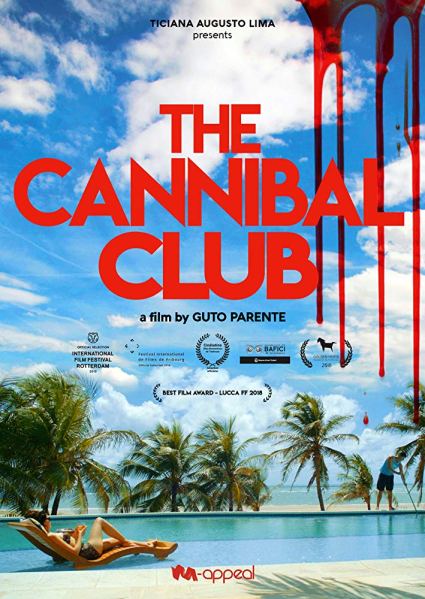 A wealthy Brazilian couple live in the lap of luxury. While on the outside they appear to live a typical rich lifestyle, behind closed doors they get up to some eccentric activities. One of those activities is killing and eating young men. The husband is even part of a cannibal club that is exclusive to rich men. When the wife catches the leader of the club in a compromising position, the couple find themselves in a dangerous position that could cost them their lives.

Brazilian writer/director Guto Parente (The Mysterious Death of Pérola) takes his audience on a strange journey with The Cannibal Club. The plot overall follows a specific pattern. We see the two leads, Otavio and Gilda, as they go through a bizarre mating ritual that also involves them killing their next human meal. Then there is a small amount of intrigue as the audience learns about the cannibal club and the various wealthy and powerful men who are apart of it, including Otavio. This allows the audience to meet the leader of the group, and the one who Gilda catches in a compromising position. There is a bit of excitement as Gilda and Otavio try to find a way out of their precarious position without losing their lives, and in the process they recruit a new employee to help them. Then the film reverts back to Gilda and Otavio’s typical mating dance, but with slightly different results.

The Cannibal Club almost comes across as a combination of Eyes Wide Shut and Hostel, but it lacks the true intrigue and thrills of those films. There is a lot of opportunity to build in various twists to add to the suspense, but unfortunately the film feels rather monotone. There are a couple minor moments that might elicit a gasp, but they are mostly there simply for shock value and don’t add anything to the plot. There is also not a lot of focus on the cannibal club itself, despite the title of the film, and instead the focus is on Gilda and Otavio’s strange relationship. This is fine, except it leads to a rather lackluster subplot about the club and a bit of a missed opportunity for more tension and thrills. It also leads to a plot that at times is quite predictable.

One of the stronger parts of this film are the performances. A highlight for me was Ana Luiza Rios (The Last Breath) as Gilda. She is equal parts charming and sinister. It is amazing to watch her be confident and seductive only to then eat a human being with a smile, and Rios portrays her very well. Her husband, Otavio, is played by Tavinho Teixeira (Batguano). Otavio is as cold-hearted as they come, yet he has a soft spot for Gilda. Teixeira does a great job of portraying the two sides of Otavio and his on-screen chemistry with Rios. These two breathe some life into the film that is often times on the dull side.

Another aspect of The Cannibal Club that adds some interest is the visuals. The cinematography alone is very beautiful and enhances the idea of Gilda and Otavio’s opulent, wealthy lifestyle. Especially with how the various locations are filmed, everything looks incredibly expensive, shiny, and unattainable. While they are used at a minimum, the practical effects are also very well done. In one specific scene at the beginning of the film the audience is shown a victim getting butchered and chopped into prime cuts of meat. Not only are the practical effects in this scene frighteningly realistic, they also stand out in the lavish home the scene is set in.

The Cannibal Club has some successful elements, the lack of tension in the plot results in a rather forgettable film. Many parts of the film will feel reminiscent to similar films that came before it, all of them focusing on wealthy clubs who prey on the less fortunate, yet this film doesn’t carry the suspense or excitement of its predecessors. The performances by the two leads are enough to hold my interest and the stunning sets, cinematography, and effects give the audience something to catch the eye. Despite these more successful features, the film will likely be forgotten by the time people pick their “best of 2019” films.