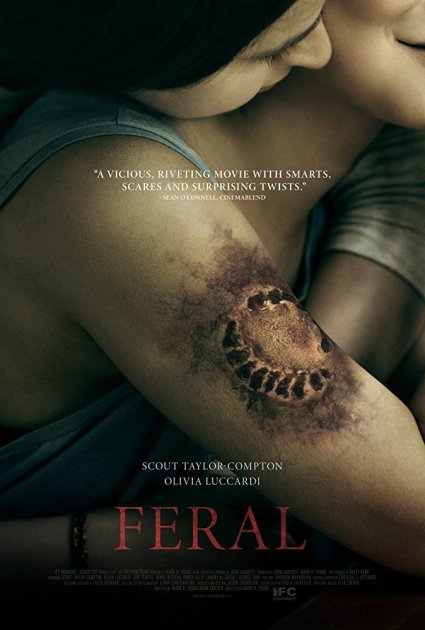 A group of medical school students venture into the woods for a camping trip. On the first night they are attacked by something. Once bitten, they become infected with a strange disease and it’s changing them into dangerous creatures. The students will have to use their medical knowledge and whatever survival skills they have to escape with their lives.

This tale of survival is directed by Mark H. Young (Tooth and Nail, Wicked Blood) and written by both Young and first-time screenwriter Adam Frazier. On the surface, the plot will seem very familiar. A group of college kids going into the woods and then being terrorized by some unknown creature is a concept that has been done time and time again. There are some thrilling and frightening moments mixed in with some more predictable ones (such as the obvious foreshadowing of who the first victims will be). The filmmakers use two methods to try to make Feral stand apart; the leading couple is a lesbian couple, and instead of just a monster in the woods there is a “feral virus.”

When it comes to having a prominent lesbian couple, the film has some high and low points. First and foremost is that the couple doesn’t fall into the typical stereotypes commonly found in film. There isn’t one woman that is more “butch” and one that is more “femme,” they are not man-hating, and their sexual orientation isn’t all they talk about or what defines them. In this way, the couple is very well developed compared to other films. The biggest drawback is the fact that they are two women in a relationship was brought up to much by other other characters, putting it in the spotlight and focusing a lot of the non-monster drama on that relationship and what others thought of it.

The virus itself is very interesting. Calling it a “feral” virus implies it might be some kind of rabies-like virus that infects the host and makes them hyper-violent. This is somewhat true in the film, but the virus also kills the host then brings them back to life as a bloodthirsty creature. There are even physical changes such as hair loss, yellow eyes, pale skin, elongated ears, and razor sharp teeth and claws. It honestly comes across as very muddled, like it is a rabies virus that turns the victims into zombie-vampire monsters. The origin of the virus is also underdeveloped. We learn that some creature in the woods bit a man, and that is supposedly how it all started. This opens up so many questions. What was the creature? Why do humans seem to be the only ones affected? Why hasn’t the virus reached outside the forest? It is good to leave some mystery for viewers, but this origin is simply too vague. Unfortunately, by trying to create something new and original, instead audiences will get something that is more confusing than anything else.

The origin of the creatures may be a bit fuzzy, but the creature design itself is pretty creepy. The makeup design does a great job of making each infected individual look similar, showing how the virus physically changes a person in the same way. The overall look reminds me of a vampire, but much more wild and ferocious than one would normally expect. The first time a creature is shown on screen is probably the most frightening part of the entire film. You can just barely make it out in the darkness as it stares down its victim. By the time you get a good look at the creature, it’s too late. There is also a healthy amount of blood and gore in the film. They do a great job of showing the attack wounds and how those eventually translate to an infected creature.

This film has some great actors who have made a name for themselves in the horror industry. Scout Taylor-Compton (Halloween, Cynthia) plays the main character, Alice. What makes Taylor-Compton’s performance stand out is how natural she portrays Alice. She is the most comfortable in the woods and remains cool under the most stressful circumstances, taking a natural leadership role in the group without any unnecessary bravado. She also has fantastic on-screen chemistry with Olivia Luccardi (It Follows, Chanel Zero: Butcher’s Block), who plays Jules. She stands out because Jules is the only one not part of the original group of friends. She is really only there because of her relationship with Alice. Luccardi portrays Jules as the outsider of the group, which makes her attempts to step up and be strong even more compelling. The most surprising performance of the film is Lew Temple (The Devil’s Rejects, 31) as Talbot. The character is interesting because Talbot functions as the harbinger archetype commonly found in horror films, but he is developed even further into a main character. Temple does a great job of making Talbot a strange mixture of sympathetic and ominous, which is not easy to achieve. The film has an overall well-rounded cast who know how to bring intensity to their performances.

Feral brings excitement and terror to the “monster in the woods” subgenre of horror. It successfully brings some elements to the plot that make it stand out from other similar films, such as including LGBTQ characters and changing up the familiar harbinger trope. There are also some standout performances from horror actors fans know and love, and creepy creature design that will make you not want to go into the woods. Where the film falls short is in the virus that creates the frightening creature. The underdeveloped background almost takes away from the fear of the virus and what it does because it simply doesn’t make sense. The film is entertaining enough, but it will likely be forgotten by the end of the year.