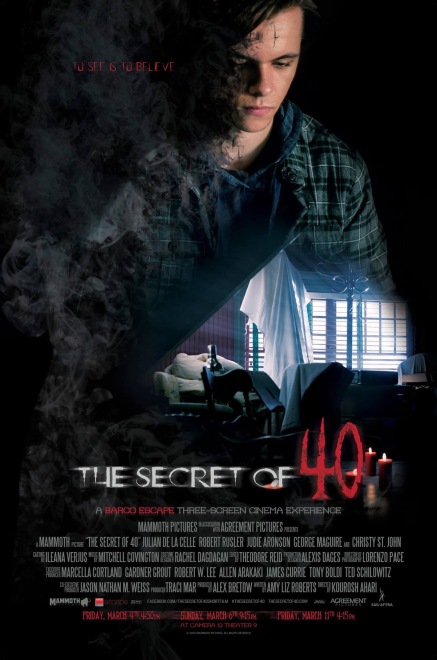 Josh (Julian de la Celle) recently lost his mother in a tragic accident. Despite his efforts to move on and continue living a normal life, he can’t seem to let go of his mother. In a desperate attempt to communicate with her one last time Josh decides to perform a ritual that is supposed to reach her from beyond the grave. Unfortunately, his mother wasn’t the only one that heard the ritual, and now Josh may have unleashed something more sinister than he ever intended.

There are so many aspects of The Secret of 40 that make it a great short. Part of what makes it stand out from other short horror films is the format it was shown on. The Secret of 40 was the very first horror film to be shown on the Barco Escape three-screen experience. When I saw the film I saw it along with a series of other shorts, each one taking a different approach to utilizing the three screens (some more successfully than others). The Secret of 40 used the screens in a few different ways that worked exceedingly well; they used it to show the present and a flashback scene at once, they used it to do a panoramic shot circling through a room, and they used it to have small details hidden in plain sight but in an area you may not initially notice. This added a level of interest to the short that you wouldn’t get with any other horror film. Not only were you watching a great film, but you got to have a unique experience while watching it in Barco Escape.

The idea of someone wanting to contact a loved one who has passed away is something we have seen before in other films. What makes The Secret of 40 different is the method in which the contact is initiated. In most films you get the typical Ouija board or seance. These filmmakers did their homework and gave the audience something they haven’t seen before. The team that created The Secret of 40 also did a great job setting up the scary moments. In some cases they would set up a scare you knew was coming, but then left it until you had forgotten about it only to surprise you with a good jump. Other times, they took an already frightening scene and pushed it just a bit further, making the audience gasp.

All around the cast of this film did a great job, but there were two stand out performances. The first one is obviously Julian de la Celle (The Fosters, Heroes) who plays Josh. What made his performance great is the way he portrayed the grief Josh goes through after losing his mother. At first he appears foggy and detached, like many people who lose loved ones do when they are in mourning, but still trying to get through each day. Then, once the idea clicks in his head that he needs to try contact his mother, de la Celle expertly shows Josh’s desperation to reach that goal. The second performance that stood out to me came from Robert Rusler (Weird Science, A Nightmare on Elm Street 2: Freddy’s Revenge) as Josh’s father. In the scene after Josh performs the ritual, Rusler masterfully portrays a combination of fatherly concern for his son and confusion as to what Josh has been up to.

This short worked not only because it had a compelling story and great acting, but also because it leaves the possibility to expand the story. The Secret of 40 ended in such a way that works well for a short, while also leaving room for the potential to add another hour of footage. The only aspect of this short that I could potentially dock points for is the simple fact that we barely get to see the evil entity. You only really saw it in brief glimpses. That being said, I believe that also works in the filmmakers’ favor because it leaves you wanting more. The Secret of 40 is a deeply unsettling film that will send chills down your spine. I truly hope that it can be made into a feature length film.