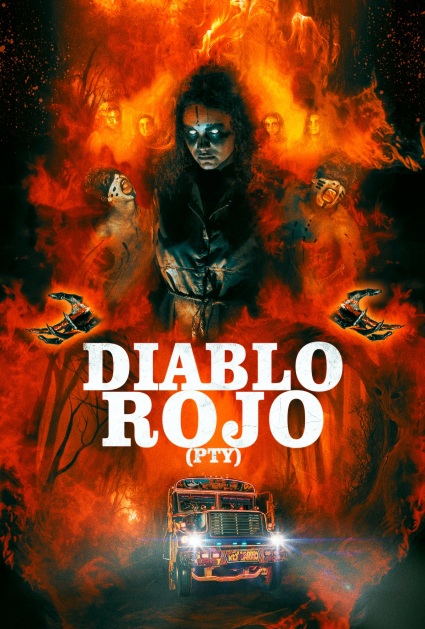 Thanks to the work of a coven of witches, a bus driver, his assistant, two cops, and a priest cross paths. They find themselves lost in a remote part of Panama. To survive, these men will have to combat witches, cannibals, and the legend of La Tulivieja. With only the bus for refuge, it will take all their effort to make it until morning.

Diablo Rojo PTY is the first horror film to come out of Panama, and it definitely jumps into the horror scene with a bang. The film is directed by first-time director Sol Moreno alongside J. Oskura Nájera (Megamuerte). Combining multiple different stories from Panamanian folklore, Nájera wrote the script along with collaborating writer Adair Dominguez, making his film debut. To say there is a whole lot going on in Diablo Rojo PTY would be an understatement. The opening of the film throws so many different things at the audience at once that many will likely have no idea what’s going on. Once the various characters are introduced, the filmmakers take time to make sense of what has already been shown. The various threads come together in a way that begins to make sense. Then in the final act the plot is thrown into chaos again, some things making more sense than others. It leads to a delightfully gory climax jam-packed with carnage.

It makes sense, since this is Panama’s first horror film, that the filmmakers would want to include as much folklore as possible into Diablo Rojo PTY. There are witches who have cursed the unfortunate men of the film. There is La Tulivieja, which has a similar origin story to Mexico’s La Llorona except La Tulivieja takes on a horrifying, ghastly form as she searches for her child along the river. There is even a deadly cannibal tribe hunting for human prey in the Chiriqui jungle. While these elements are interesting, it is really too much for one film. Viewers will see shocking things including the witches, cannibal tribes, a monstrous creature, infanticide, and even incest. Unfortunately, many of these things are shown, but never full realized or explained in enough detail. The plot ends up muddled and inconsistent as some areas are more explored while others are never fully resolved. The same can be said for the characters. Some of the characters, like Manuel, feel more fully formed compared to someone like Officer Pinilla who seems to just be there to have someone to dislike. Many viewers will likely find parts they can connect to and parts that leave them wanting more.

Despite the ups and downs in the plot and character development, the performances are still enjoyable to watch. Carlos Carrasco (Speed, Parker) stars as the Diablo Rojo bus driver, Manuel. He is by far the most complex character in the film, and Carrasco brings depth to a man who initially comes across as quite simple. Julian Urriola makes his debut as Manuel’s assistant, Juanito. Juanito is definitely a misfit, and that persona doesn’t really change even when facing certain death. While the character isn’t necessarily that likable, Urriola does a great job of bringing him to life. Blas Valois also makes his film debut as Officer Pinilla. This character makes the least amount of sense of everyone. He’s rude for no apparent reason, doesn’t seem to be a very good cop, and keeps stupidly going off on his own even when he knows what dangers lie in wait. The way this character is written unfortunately makes it really difficult to tell if Valois’s performance was part of the problem as well, or just the character.

As with much of the film, the visuals in Diablo Rojo PTY are also a mixed bag. For the most part I would say the visuals feel like what fans would expect from a low-budget horror flick. The filmmakers relied entirely on practical effects to create the creatures and gore. There are some particularly grotesque effects in the climax of the film that might not look the most realistic, but they are still very well done and make the scenes fun to watch. The creature design for La Tulivieja is definitely unique and is sure to remind horror fans of the demons from the Evil Dead franchise. That nod to classic horror is just one of many throughout the film, and honestly these nods are some of the most enjoyable parts of the film. The musical score by Ricardo Risco sometimes sounds very similar to the score from The Shining. Even the very last scene of the film takes iconic imagery that likely comes from Carrie and A Nightmare on Elm Street 2: Freddy’s Revenge. Again, I really enjoyed these visual nods to classic films, but sometimes they added to the muddiness of the plot.

Diablo Rojo PTY has some great moments and includes a lot of fascinating Panamanian folklore, but it quickly reaches the point of having too much. Moreno and Nájera have nuggets of greatness throughout the film. The problem is, when you try to include so many different elements, nothing ends up getting the time and attention it really deserves. A film that has witches, cannibals, and La Tulivieja is a lot to tackle in a film that is only about an hour and 16 minutes. The performances, practical effects, and visual nods to classic horror films make up for some of the film’s pitfalls, but there is still a lot to be desired. I do believe this is a promising start considering it’s the first horror film from Panama. Hopefully the filmmakers will remember this adage on their next film: sometimes, less is more.