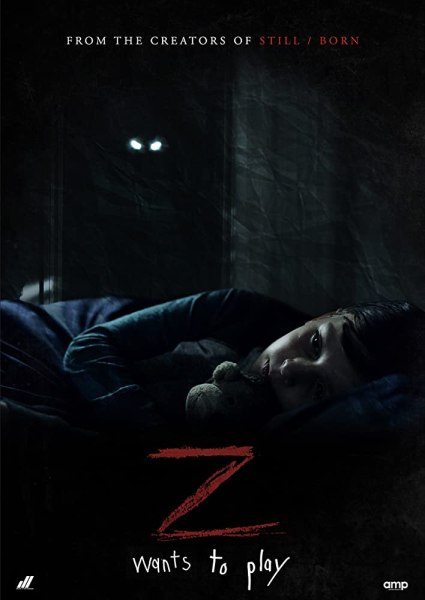 An 8-year-old boy gets an imaginary friend. What begins as a simple childhood fantasy quickly turns sinister. The boy is acting out and blaming his imaginary friend. As the family’s life is turned upside down as they are terrorized by this invisible force, they will have to turn to the past in order to survive the present.

Z is the sophomore feature film of director Brandon Christensen (Still/Born), who also co-wrote the screenplay with Colin Minihan (Grave Encounters, What Keeps You Alive). Christensen and Minihan’s combined efforts manage to bring viewers a bit of the familiar along with some thrilling new bits. These days, horror films about imaginary friends seem to be increasingly common. The filmmakers take a bit of time introducing this imaginary friend, allowing time to establish the family unit and their dynamics first. When we do finally meet Z, the imaginary friend, it is just whispers and mentions of him as the son plays. Yet it doesn’t take very long for those whispers to turn to behavior issues and then full-blown terror. This gradual increase in suspense allows for some brilliant and terrifying scenes that are sure to haunt viewers. Z even takes the time to tackle many issues including the horrors of parenting, emotionally and physically abusive relationships, and suicide (take this also as a trigger warning for anyone who has difficulty watching these topics on screen). For the most part these aspects of the film are very well done, but certain parts feel a little derivative of other films, especially the climax. Z ends with a fair amount of closure, but the filmmakers wisely left some questions in the dark. I could definitely imagine a sequel to Z in the future.

One of the things about Z that surprised me was how it almost feels like two films. The first half of the film is very much a story of a mother and the love she feels for her son. When she first learns of her son’s behavioral problems, and feels the consequences of this in their social circle, she is completely in denial. Every mother wants to believe the best of their child, and it’s more difficult to see the truth with those blinders on. When the mother finally realizes the real danger, she has to battle a sinister imaginary friend, her disbelieving husband, and even her own son in order to try and save those she loves. At one point there is a scene I believed to be the end of Z, but to my surprise the film continues for another 20 minutes. This second section of the film feels much more like watching an abusive, controlling relationship. It is truly disturbing to see the woman’s life upended and left to the mercy of a male figure. Every moment of every day of her life is controlled by this entity, forcing her to distance herself from the outside world for fear its jealousy will lead to their harm. This is very powerful and disturbing in how it’s conveyed, but at the same time it makes the film feel a bit disjointed. The two halves work very well on their own, but I don’t know if they necessarily work together.

Every performance in Z is truly stunning. Keegan Connor Tracy (The Magicians, Final Destination 2) plays Elizabeth. While Tracy is fantastic through the entire film, she truly shines in the last half of the film. Elizabeth goes from questioning her own sanity to being willing to do anything it takes to save her son. Tracy absolutely shines in this role and brings heart-wrenching emotion to the horror of what’s happening. Jett Klyne (The Boy, Chilling Adventures of Sabrina) plays Elizabeth’s son, Joshua. The way Klyne shows Joshua’s gradual transformation from normal, sweet boy to a very disturbed child is a performance I won’t soon forget. While these two actors carry most of the film, Sean Rogerson (Grave Encounters) is great as husband and father, Kevin, while Luke Moore (Sex, Lies & Murder) frightens viewers as Z himself.

The filmmakers behind Z were very wise with their scares. Much of the terror is from the building of tension, including some long, drawn out images where you are at the edge of your seat waiting to see what will happen. Yet that tension is punctuated with some perfectly crafted jump scares. These are definitely earned jump scares that will still have an impact, if not necessarily the scare, upon subsequent viewings. Most of the bigger scares rely heavily on great camerawork, making sure your eye is drawn to the right place at the right time. But, of course, many of the scares wouldn’t be complete without Z. The single greatest thing the filmmakers did was barely show Z. Viewers will get starling glimpses here and there, giving enough of an impression of his frightening appearance, but for the most part he is invisible and left to the shadows. So many horror films show too much of their evil entities, but by leaving the imaginary friend mostly unseen the viewers are able to project some of there imagination onto the character. Z is also created with a combination of motion actor and CGI, which wouldn’t be quite as effective in full view.

Z brings a menacing imaginary friend to life in a way that tackles dramatic issues while also delivering scares. Christensen and Minihan definitely created a ghoulish tale to haunt horror fans, but they also managed to embed compelling takes on motherhood and trauma. Z boasts strong performances, especially from Tracy and Klyne, and has what is probably the most terrifying imaginary friend I’ve ever seen. While there is a clear divide that seems to split the film into two disjointed parts, both parts are fascinating in how they deal with certain topics. Despite the flaws in the overall story arc, there are definitive moments that are guaranteed to be embedded in your mind long after watching.