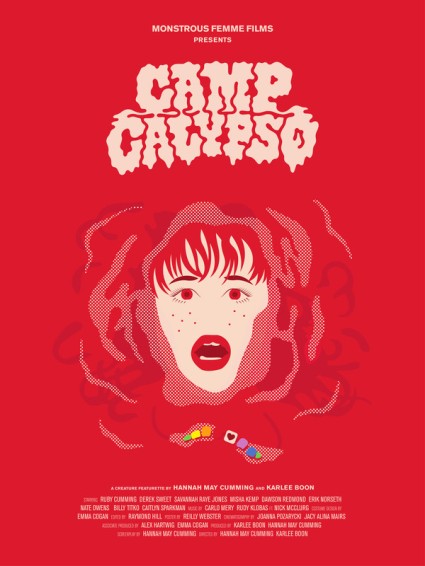 It’s the 1970’s and a group of kids are arriving at a summer camp on its last legs. It’s a typical camp complete with misogyny, cabins, camp counselors on drugs, and a seedy new camp director. It seems like just another summer at camp, until the legend of the lake siren proves to be a little too real.

A lot of artistic work went into Camp Calypso to make it feel like it could come from the late 1970’s while also making it a fun creature feature. For a low-budget short film, they managed to get a really great location for the camp that helps transport the audience. The wardrobe also helps quite a bit in this area, each outfit looking like it could easily have come from the late 70’s or early 80’s. Camp Calypso also has a vibrant color palette that catches the eye. What is especially surprising is the delightful creature effects for the siren. The practical prosthetics are subtle, but very well done and effective. Plus there is some delightful gore thrown in for good measure. Plus the short boasts a fantastic score by Rudy Klobas, Carlo Mery ft. Nick Mcclurg that perfectly embodies the time period. The only visual aspect I didn’t like is more of a film pet peeve of mine: the use of blue filter to make turn day into night. I realize it’s the simplest and most cost effective method for filmmakers, but it never looks right.