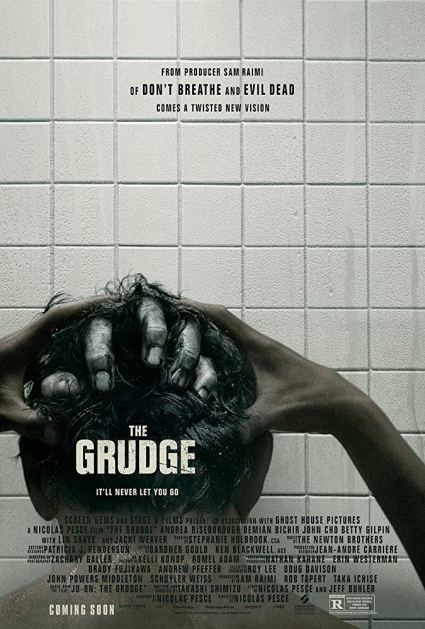 When an emotional, violent crime is committed, it leaves a stain. That stain grows and festers, affecting all those who encounter it. After a woman returns from a job in Japan, a curse infects her home. It leads to a chain of horrific events and disturbing deaths. A detective will have to investigate to stop the curse and save herself from the ghosts haunting her.

January is generally considered a throw-away month for films released in theaters, especially horror films. The first horror release of January gave some horror fans hope that trend would be broken. The Grudge has a long film history beginning with the 2002 Japanese film, which spawned many sequels, and then the 2004 American remake. Now, writer and director Nicolas Pesce (Piercing, The Eyes of My Mother) has created another addition to this lucrative dynasty. Unfortunately, this latest iteration is riddled with issues. The most obvious issue is the pacing. Much like the film’s source material, the plot jumps back and forth to different periods of time beginning with the woman who brought the curse back from Japan and ending with the detective investigating it all. While audiences have seen this work, even within the frame of The Grudge films, in this version it makes the film feel like it drags. There simply isn’t enough that happens between the time jumps to keep things exciting.

For some reason, whether an artistic choice or a decision made by the producers, the film directly connects to the house fans will know from Japan. That means it also relates back to Kayako. This connection seems unnecessary in the 2020 version of The Grudge. The film ends up being a weird sequel/remake/reboot all in one. This version would have been better served to stand on its own, separate from the Japanese version. It ends up creating more confusion because there isn’t a solid mythology to build from. The first woman carried the curse back from Japan, but then it is only her ghost and the ghosts of her family we see haunting people, not the ghosts from Japan. It begs the question why the curse followed that specific woman and started a new curse in her home, but then the same thing didn’t happen to those cursed in the states. While there are many plots points that are not fully developed and various plot holes, this mythos, or lack thereof, is the most apparent.

Fans of this franchise will likely go into The Grudge expecting plenty of tension and scares. People who know me will likely know I am a huge wimp and get scared easily. If this gives any indication, I was not scared at all during the entire runtime of this film. The film relies too heavily on unearned jump scares that don’t manage to cause much jumping, and it fails to build the tension between scares as well. The Grudge also relies too much on grotesque images to attempt to elicit fear. While these practical effects to create the horrifying ghosts are beautifully done, they also come across as more of a gimmick to achieve an R rating, rather than something vital to the plot.

While the character development is lacking, the most successful aspect of The Grudge is the performances. The standout performance by far is horror fan-favorite Lin Shaye (Insidious, Room For Rent) as Faith Matheson. Faith is a woman whose physical and mental health are on a swift decline. Her interactions with the curse are somewhat unique from others, and Shaye delivers a spine-chilling performance in this role. The other two performances that are enjoyable come from John Cho (Searching, Star Trek) and Andrea Riseborough (Mandy, Oblivian). Both Cho and Riseborough do well in their respective roles, although the characters are not very well written so they come across as flat. They do the best they can with what they are given.

The Grudge lacks a solid mythos to build a terrifying story, resulting in a slow and lackluster start to 2020. Based on Pesce’s body of working leading up to this film, which consists of some great films, one can only assume he was restricted by producers. The film moves along far too slowly, fails to create the scares fans expect, and contains one plot hole after another. My one hope is that this doesn’t keep Pesce from continuing to make the kinds of films we all know he’s capable of.