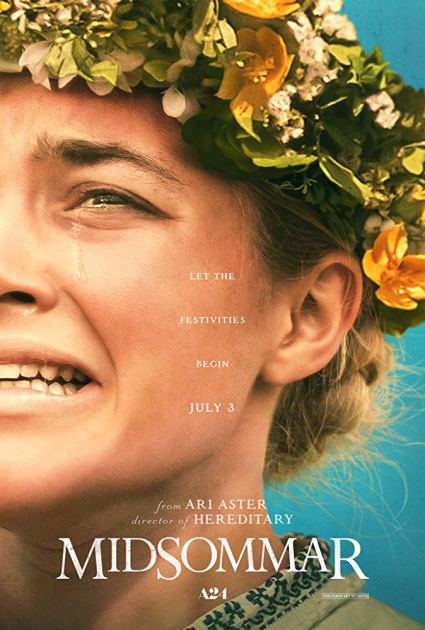 Dani has experienced recent emotional trauma. When her boyfriend invites her on a once-in-a-lifetime trip to a solstice festival in Sweden, she thinks it is just what she needs. The sunny, idyllic location is the perfect setting for the festivities. Yet the rituals become increasingly bizarre and violent, threatening the lives of Dani and her friends.

Writer and director Ari Aster (Hereditary) has created another work of art with his sophomore feature film, Midsommar. This film takes on a different kind of cult that focuses more on the pastoral horror seen in films like The Wicker Man. The audience is first introduced to Dani as she is going through a very traumatic time in her life. She gets roped into what was supposed to be a guys’ trip to Sweden for a festival that only happens every 90 years in a remote village. The insanity that ensues is beautiful, disturbing, sometimes humorous, and everything in-between. Aster clearly has an affinity for paganism and cults and he takes great care in creating an intricate mythology.

There are two aspects of the film that give it quite a bit of intensity. The first is Dani’s emotional issues, which are exacerbated by the tension in her relationship with her boyfriend and the events of the festival. She is constantly at odds with her own emotions. Even when everything is falling apart around Dani, she tries her best to hold herself and her relationship together. The second is with the festival itself. While the events become increasingly horrific, there is an even deeper dilemma that arises with the rituals. Many of the outsiders who are in Sweden for the festival are anthropology students. They show how there is a delicate balance when observing different cultures. Sometimes what you see is horrifying to you, but from that culture’s perspective it is normal. I studied anthropology in college, so I can understand the moral quandary that comes from wanting to be respectful of different customs and cultures, even when faced with something shocking. The way the rituals in Midsommar gradually become more strange and violent allows for tension to build while also conveying the increasing difficulty the outsiders have in deciding when things have gone too far.

One of the most surprising plot points of Midsommar is the underlying theme of home and family. Home can mean different things to different people, but the common thread is usually having a place to belong and being around people who care about you. Much of Dani’s journey relates to family and the need to feel as if she’s at home. The character arc Aster creates in relation to Dani’s quest for that feeling of home is compelling and ends in an entirely satisfying way.

On top of the intricate and suspenseful story, Midsommar also has powerful performances. Florence Pugh (Lady Macbeth, Malevolent) stars as Dani. Pugh makes Dani a fascinating and sympathetic character. Her portrayal especially shines when she conveys Dani’s emotional trauma in a way that is absolutely gut-wrenching. Jack Reynor (Free Fire, Sing Street) plays Dani’s boyfriend, Christian. In many ways Christian is the polar opposite of Dani. Reynor manages to make Christian a very unlikeable character, especially when he is gaslighting Dani and just generally being a terrible person. Normally it is important for couples in film to have great on-screen chemistry. That isn’t the case for Pugh and Reynor as their lack of chemistry only helps to tell the story of their unfortunate relationship.

After only two films, Aster has managed to create a signature style for his films. His films always have gorgeous production design, unique transitions between scenes, and he always has a simple signature sound used throughout the film. Most horror films are shrouded in darkness, yet Midsommar takes the opposite approach. Almost the entire film is drenched in sunlight and has vibrant colors. Not only does the outdoor setting have this appearance, but the various buildings in the Swedish village have this same quality. This is a bold choice that pays off because of how well Aster makes even the most cheery-looking place seem sinister. The cinematography helps to make the production design and the transitions even more eye-catching. In Hereditary, Aster used a slight clucking noise made by one of the stars to build tension throughout the film. Aster repeated this method in Midsommar, only this time it is with a strange, quick breath out and in. This sound is haunting and memorable. It takes the most innocuous sound and gives it an edge that can insight terror.

Midsommar brings terror into the light in this shocking pastoral horror film. Aster perfectly exemplifies his talents as both a director and a screenwriter, making it clear that he is a true master of horror. The film creates a fascinating pagan mythology set in a remote village, then builds on that mythology in disturbing ways. As if that isn’t compelling enough, Aster also uses Dani’s character to convey trauma and the human need for home. Pugh’s portrayal of Dani is haunting and will stick with audiences. There will likely be audience members who don’t like this film because it isn’t scary enough for them, because of the brightly lit setting, or because of some of the more strange rituals. I believe the film is a work of art and I can’t wait to see what Aster comes up with next.