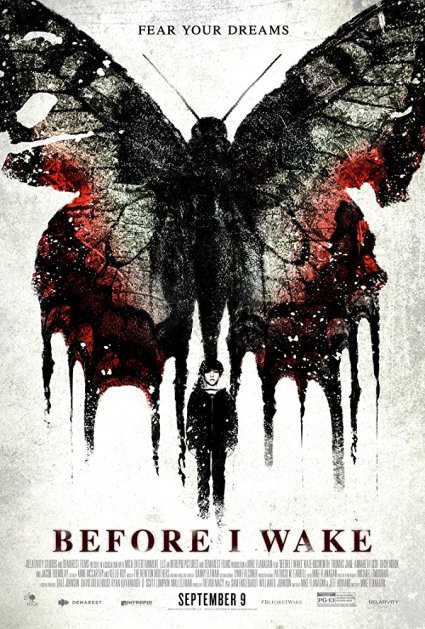 A young couple lost their son in a tragic accident. As a way to cope with their loss they decide to adopt an orphaned young boy. Little does the couple know that this is no ordinary child. Everything he dreams becomes real while he sleeps. It can be beautiful, but his nightmares become just as real as his dreams. The couple must discover the boy’s mysterious past in order to save his life, and their own.

This film built a lot of anticipation for horror fans. It was meant to be released back in 2015, and there were even trailers out as far back as four years ago. Unfortunately, the filmmakers had troubles with the distribution company, and this led to the film being held in legal red tape for far too long. Finally, Netflix was able to get their hands on the film and release it for streaming this year. Between the years of delays and writer/director Mike Flanagan’s previous success with Occulus, people were understandably excited to finally see Before I Wake.

Flanagan created a very interesting and unique story with this film. So many people wish their dreams could come true, but this is a very unique take. The boy doesn’t get to reap the benefits of his dreams coming true, as they only come true while he sleeps. Also, many people don’t take into consideration that, by having their dreams come true, this likely means their nightmares will come true as well. While this is a very interesting, and often frightening concept, what brings the plot to another level is how the couple reacts to the boy’s ability. Losing a child is difficult. When the boy dreams of their son and they are able to hold him again, it’s only natural that the mother would want the boy to dream more about her deceased child. It isn’t until they finally see what happens during the nightmares that the mother realizes she needs to find out how or why this is happening. It makes for a frightening and emotional film. While the emotional side of the film makes the story quite compelling, there are times where it comes across as overly sentimental. That sentimentality also leaves a few loose ends by the time the film ends.

With this being such an emotionally driven film, it is important for it to be well cast with strong actors. Kate Bosworth (Blue Crush, Straw Dogs) plays Jessie. What makes her performance so powerful is how Bosworth shows the struggle a mother goes through after losing a child. She clearly wants to be a good mother to her adoptive son, but the pull to see her dead child in the boy’s dreams is too seductive to ignore. Initially it makes you dislike Jessie, but Bosworth manages to make her a sympathetic character as the plot progresses. Another equally strong performance comes from Jacob Tremblay (Room, Wonder) as the adopted son, Cody. Tremblay yet again proves he is a fantastic actor, despite his very young age. He portrays a very complex character who knows the effects of his own dreams and fears what his strange ability will do to others. These two actors together make for some exceptional and emotional scenes.

A film like this would be nearly impossible to create without the use of CGI. For the most part, the CGI is beautifully done. There is one specific scene where the butterflies that Cody typically dreams about combine with Christmas lights to create fantastical and stunningly gorgeous imagery. It is when the nightmares come out that the CGI doesn’t hold up quite as well. Cody’s main nightmare is a terrifying creature who eats people. For this, the filmmakers layered CGI over an actor. While in the dark this figure is frightening, in the light it doesn’t have quite the same impact. It is the kind of creature that would be more frightening left in the shadows. However, when the origin of this creature is discovered it ends up making sense why the filmmakers chose to show it in the light.

Before I Wake is a victim of circumstance. It had a lot of buzz when the trailers were first released, but the continued delays likely made fans forget about the film over time. The film has a unique premise with beautiful imagery and strong performances. The plot can be a bit over-sentimental, leading to a few glaring plot holes in the final act, but it is still fascinating to watch. It would be interesting to see if the film would have been received differently if it had been released as planned back in 2015. While it isn’t Flanagan’s strongest work, it is definitely worth a watch.