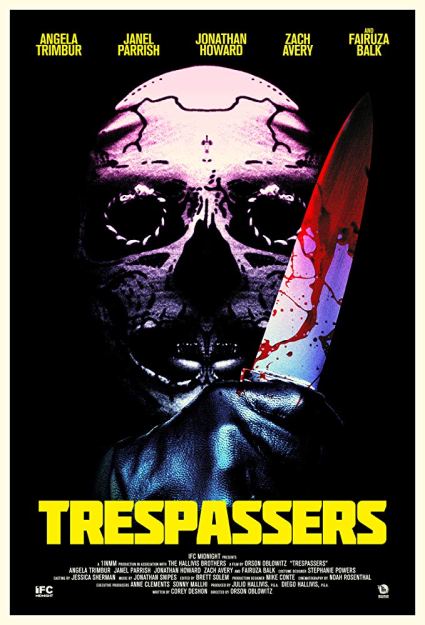 Two couples meet at a vacation rental home in the desert. What was supposed to be a weekend getaway to recharge and rekindle romances quickly turns sour when a strange woman rings the bell late at night. From the moment they open the door, the night spirals wildly out of control resulting in lies, violence, and death.

This thrilling spin on a home-invasion flick is written by Corey Deshon (Shine) and directed by Orson Oblowitz (The Queen of Hollywood Blvd). The filmmakers waste no time in setting the tone for the bloody time audiences are in for. The relatively simple plot of Trespassers is made more interesting in the way it quickly builds tension and manages to subvert expectations. From the opening scene it is clear that anything can and will happen to these unsuspecting couples. For the two couples renting the home it starts with the stranger ringing their bell. After that the film is jam-packed with shocking and unsettling twists that go from bad, to worse, to outright catastrophic.

The most successful aspect of Trespassers is the building of chaos. While each new turn doesn’t always exactly go the way one might expect, the turns are still believable within the context of the plot. Some of these turns are more subtle, some of them come into the plot with a bang. It keeps the audience on the edge of their seats, never fully knowing what could possibly happen next. The only true problem with the entertaining plot is the characters. In a home-invasion style film one of the most important aspects that helps maintain the suspense is creating characters the audience cares about. While there is one character that is endearing, the rest of the characters are all horrible people. The plot was thrilling enough to hold my interest, but I really didn’t care if anyone except Sarah died.

While the entire cast is fantastic, it’s the ladies who completely steal the show in Trespassers. Angela Trimbur (Final Girls, XX) stars as Sarah. Sarah is the one who booked the beautiful rental in the hopes of reconnecting with her husband and her best friend. I’ve been a fan of Trimbur since seeing her in Final Girls. It was nice to see her take on a leading role with a lot of emotional depth and she delivered a compelling performance. Janel Parrish (Pretty Little Liars, To All the Boys I’ve Loved Before) plays Estelle. She is Sarah’s best friend, but they are complete opposites. Estelle is a wild child who really isn’t a great friend. Parrish’s performance stands out because, despite Estelle being a lousy person, she still manages to make me care just enough that I want her to live. Then of course there is fan-favorite Fairuza Balk (The Craft, Almost Famous) as the mysterious late night visitor. Balk steals every scene she’s in by perfectly straddling the line between innocent and creepy. She makes it so the audience second-guesses if she can be trusted or not. All three of these woman deliver strong and dynamic performances.

Arguably the best aspect of this film is the artistry. From the visuals to the effects to the music, it’s all absolutely stunning. The house is gorgeous and modern, but set in a remote area to allow for a more isolated feeling. When things really take a turn for the worst the filmmakers use gorgeous lighting in vibrant reds, blues, and greens to make each scene as beautiful as it is suspenseful. Trespassers also has a surprising amount of gore in it. With this kind of thriller I anticipated the kills would be well executed with practical effects, which they definitely are, but they are much more graphic than I expected. There is one specific kill that is quite shocking and is fantastically done with practical effects. Then, to top everything off, the film has a wonderful score by Jonathan Snipes. The music really sets the tone for the film and helps to get the audience excited in the more action-packed scenes. Snipes even effectively integrates the sound of the doorbell into the music, which manages to make both the doorbell and the music even more sinister. These elements intertwine to make this film stand out.

Trespassers is a series of unfortunate events that leads its characters down a dark and twisted path. Deshon and Oblowitz combined powers manage to create a familiar home invasion film, but with a distinct edge. This edge can be seen in the compounding suspense that builds in unexpected ways and an amazing score that helps to build that suspense. Trespassers even gives the audience some great eye-candy in the form of beautiful lighting and superb practical effects. While I wish the characters were a bit more endearing, the performances still make them fun to watch, especially from the three female leads. You won’t want to miss this entertaining flick.